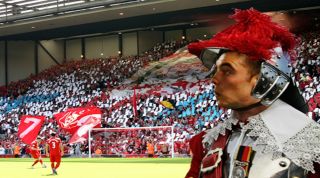 Celta Vigo striker Iago Aspas is set to snub Liverpool, instead becoming a mythical figure of Spanish folklore, the player's agent has revealed.

The 25-year-old marksman has been strongly linked with a move to Anfield this summer, having won many plaudits since his top-flight debut in Spain back in August 2012.

But Aspas seems to have loftier ambitions and is poised instead to make the rare move from non-fiction to fiction, becoming a fabled folk hero.

"While he was obviously flattered by interest from Liverpool, the player feels his future lies in the collective imaginations of a million men as a figure of mystery, intrigue and conspiracy, at once terrifying and transcendent," agent Carlos Mourino told FourFourTwo.

"The opportunity to link up with Luis Suarez and battle for Champions League qualification is appetising, but that's not for Iago Aspas.

"Aspas is altogether more illusory - he lives on the fringes of your consciousness. Is he a hero? Is he a villain? He's both, and yet nothing, he's a whisper in the wind."

Moves from fiction to reality are much more commonplace than the reverse in the football world. Zenit St Petersburg have former comic book star Hulk up front, while Celtic controversially broke the bank for the Loch Ness Monster last August.

Aspas himself was unavailable for comment, despite multiple reports that he had been seen standing on top of the Hospital Xeral in Vigo, his crudely fashioned cape fluttering in the breeze.