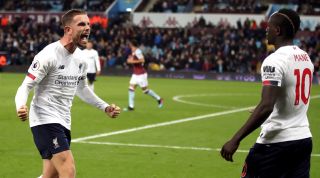 Awards season is upon us - but we’re not talking about the Grammy’s or the Oscars.

The Professional Footballers' Association Men's Players' Player of the Year - or the PFA Player of the Year - is now in its 36th year. Its roll call includes the likes of Eden Hazard, Thierry Henry, Cristiano Ronaldo and Andy Gray - but who’s likely to join the illustrious list in the 2020 edition?

History doesn’t look likely to repeat itself for the Reds. The sole survivor of Brendan Rodgers’ side, Jordan Henderson is now captaining a Liverpool side to a record-breaking title, marshalling the midfield both as a No.8 and deeper as a No.6 in Fabinho’s absence. The England man has been solid and steady this season, with outstanding displays recently against Wolves and Southampton, where he scored and assisted in both games. As things stand, Henderson is the bookies' favourite.

The African Footballer of the Year, Sadio Mane has enjoyed a phenomenal couple of years at Anfield, lifting the Champions League last summer and scoring 15 goals so far this season for Liverpool, including two in the European Super Cup against Chelsea.

The Senegalese frontman is reportedly a big favourite among his colleagues and commands huge respect from his rivals. Until his recent injury, he was in fine form, netting or assisting in all but one match in December. He may well have done enough to leave an impression in voters’ minds.

Discover how Sadio Mané became one of the world's best players in the new issue of FourFourTwo magazine, out now

Liverpool aren’t the only side with players chasing records in their side.

Manchester City’s Kevin De Bruyne is currently on 15 assists for the league season, having registered 16 in the 2017/18 season - City’s Centurions campaign - and 18 the season prior. That’s an astonishing record – yet throughout City’s dominance of domestic football, the Belgian playmaker has been curiously absent from collecting silverware at red carpet dinners; he’s not won any PFA, FWA or FSF awards.

If the PFA are ever going to award the title to De Bruyne, this is surely his best season to choose from. He looks likely to become only the second-ever player to have made the most assists in three Premier League seasons - David Beckham was the first - and he’s been the standout star in a Man City side that has underwhelmed by their own high standards.

Only five footballers have ever won two PFA Players’ Player of the Year trophies, with only Henry and Ronaldo retaining the award in consecutive season. Virgil van Dijk could join them this season, having won the award last year for a flawless campaign.

Liverpool have conceded just 15 league goals all campaign, with the Dutchman being one of the primary reasons for such fantastic form at the back. Van Dijk has been imperious for club and country and though awarding the same player the gong two years on the trot is unusual, the PFA may decide that the defender is such an example.

Much has changed at the King Power Stadium since Leicester City’s fabled title win back in 2016 - but Jamie Vardy’s party is still rolling on.

Back then, Riyad Mahrez took the PFA award with beloved midfielder N’Golo Kante winning it the season after for his exploits in Chelsea’s title win. Vardy has been largely left out of award talk but following the controversy over wife Rebekah and her feud with Coleen Rooney in the autumn, the 33-year-old went on a particularly fruitful purple patch in the league, scoring in eight consecutive league games for Leicester, including the 9-0 drubbing of Southampton.

This might be Jamie’s final flourish - what better way than to cap it with a little recognition like this?

Despite ending 2019 as a 25-year-old, Raheem Sterling picked up the PFA Players’ Young Player of the Year award last season during Manchester City’s domestic treble-winning season. Sterling’s been on supreme form again this season, netting three hat-tricks since the season started for club and country.

In a City side full of stars, Sterling looks perhaps most like the neutrals’ favourite. He may not have scored or assisted in 2020 yet, but given his growing influence in the City side, coupled with his exploits for England, he could be seen as the best chance that anyone outside of the Liverpool team has of winning the PFA gong.

COMMENT Something isn't working for Kepa Arrizabalaga at Chelsea – can Frank Lampard find a way to fix it?

QUIZ Can you name every player to play for both Inter and AC Milan since 1995?