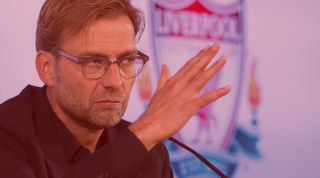 Jürgen Klopp gave me the scare of a lifetime. It happened on a sunny day in March 2011. We were sitting in a sparsely decorated room on Borussia Dortmund's training ground and I was interviewing him for a Scandinavian magazine. He'd just done some light running and was dressed in a T-shirt and shorts. When he said something he felt could do with some emphasis, he loudly slapped his thigh.

Klopp's team was on the verge of winning a totally unexpected league title at that time, but we didn't talk much about the present. I wanted to know why he had chosen the Dortmund job in the first place. Klopp's lengthy reply was a major reason why I always felt a club like Liverpool would be to his liking.

He never mentioned money or the prospect of winning trophies, he refrained from using the hackneyed phrase of "the new challenge" and didn't say he felt the squad was promising.

Instead, he said all the things a fan would say – and sounded like a romantic doing it. He talked about how football, for him, was all about emotions and that he felt attracted to a place where it was more than just a game, where it was the lifeblood of an entire city – maybe even a whole region.

He told me how he'd always loved to come to Dortmund as an opposing coach because of the huge, passionate crowd and that he used to stand on the pitch, stare at that mass of people and wonder what it must be like to manage a team for them.

The longer he talked – and he is a natural, mesmerising talker – the deeper my heart sank. Five months earlier, my wife and I had decided to leave the Dortmund area and move to the far north of the country. While Klopp's team began to mount their unlikely title challenge, we regularly made the 300-mile trip from Dortmund to the Baltic Sea to house hunt, listening to Klopp's latest stunning away win on the radio.

After 45 years of never living more than half an hour away from Borussia's ground, I was about to leave the very place Klopp had just made out to be as close to paradise as you could get. What's worse, I was moving to Schleswig-Holstein, the only federal state on the territory of the former West Germany that has never had a team in the Bundesliga.

"This is the most emotional football region in Germany," Klopp said, making a sweeping gesture I took to mean Dortmund or maybe the surrounding Ruhr area. "It's totally different from any other part of the country." Then, abruptly, he leaned forward and fixed me with his gaze. "I guess the biggest difference," he said slowly, "is with Schleswig-Holstein."

I stared at him and he stared back. For a few quiet moments, all sorts of weird thoughts were racing through my mind. How did he know? Was there a mark on my forehead that branded me as a spineless deserter? Did he think I was a poor soul that needed to be guided back on the right path? After all, the press regularly called him a "fisher of men" for his uncanny ability to relate to people and win their faith.

A loud bang made me snap back to reality. Klopp had slapped his thigh. Then he leaned back and laughed his trademark short but hearty laugh, the one a well-known German comedian has centred his Klopp impersonation around without ever getting it quite right. "So, that's why I'm here," he continued.

"Even though there are some people 30 kilometres from here, in Schalke, who will vehemently deny it, I would say Borussia is the most emotional club." He gave me a look that indicated this was his answer and now he was ready for the next question.

I felt at the same time silly and intrigued. How could I think even for a second that Klopp was interested enough in one of the countless reporters he was facing every day of the week to make inquiries about him? Then I realised that what I had just witnessed was Klopp's fabled ability to connect with people on a very basic level. He can have a hypnotic effect on you simply because he is utterly focused on everyone he happens to talk to – be it a player, a journalist or a regular fan on the streets – and gives you the feeling you are right now the most important person on the planet.

This is not an act, it's not an acquired technique. It's just the way he is. Apart from "emotional", the most widely used word in the coverage Klopp received in Germany was "authentic". He got so much of this coverage, being a natural in front of cameras and microphones, that many non-Dortmund fans had grown tired of the constant barrage of Klopp soundbites and endless images of his antics at the sidelines. In Dortmund, though, nobody grew tired of him. When he stepped down – and this is not an exaggeration – the city was in mourning.

The reason was precisely this ability to connect with people on a personal, direct level. Other fans only ever saw Klopp on television, but Dortmund supporters actually met him in the flesh and invariably found him to be exactly the easy-going and humoruous-but-determined person he was on the screen.

In 2013, I published an oral history book about Dortmund's support and spoke to countless fans during the research, old and young. Almost all had a Klopp story to tell, about a chance meeting on the streets of the city or while signing autographs at the training ground.

FEATURE Klopp: What it’s really like working for him by those who've done it

FEATURE The making of Jurgen Klopp: the bearded wonder who forced Pep to betray his principles

One story that stuck in my mind is how he was supposed to meet an epileptic child who was a big Dortmund fan. When Klopp entered the room, he noticed a camera and a few photographers, present to document how he was a man of the people and how touching it was to see him with the poor kid. Klopp shook his head, walked over to the press people and asked them to leave the room. The boy, he said, was certainly excited and agitated enough, any flashbulb could trigger a seizure. The media people left the room and Klopp had a long talk with the kid without anyone watching.

I'm not relating this story to show what a sensitive person he is. I have seen enough Dortmund training sessions to know that he can also be very, very rough and ruthless. Rather, I did this to return to the subject of communication. Man-management and motivation are not, as some detractors have said, his main tools. But communication, forming a bond, is crucial to his style. One of his greatest strenghts is that he always finds fresh ways of saying something, in the dressing room, on the street or in the press room. He almost never uses a cliché or repeats himself. That is, he never does this when speaking in his native language.

Can he do this in England too? That's the question now. He will have to learn English very quickly. Of course he speaks the language, some even say decently. But he's nowhere near as fluent as he needs to be in order to be fully himself. The language was never an issue for Felix Magath, who doesn't talk to his players anyway. For Klopp, though, it's now a more pressing issue than getting to know the squad or the league.

Then again, I wouldn't be surprised if he comes back in three years, perhaps to coach Germany, having acquired an impenetrable Scouse accent.

More features every day on FFT.com • Jurgen Klopp on FFT