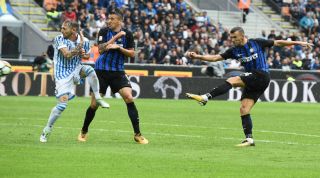 Inter condemned the newly promoted club to their first loss of the campaign with a 2-0 victory at the San Siro.

Mauro Icardi gave Inter the lead from the penalty spot in the 27th minute, before Perisic – who recently signed a new five-year contract with the Nerazzurri – sealed the win three minutes from time with a fine volley.

Danilo D'Ambrosio's floated cross to the far post was met by the Croatia international, who waited patiently to connect perfectly and rifle a shot past Alfred Gomis.

Perisic's fine goal is his second in three Serie A starts this season.