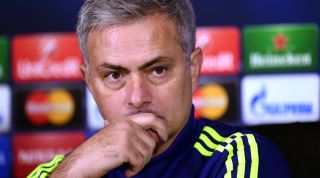 Chelsea boss Jose Mourinho has taken heart from Ruben Loftus-Cheek’s debut, stressing he couldn’t have asked for more from a player he invented just days before kick-off.

Loftus-Cheek was brought on after 83 minutes against Sporting and looked at home on the Champions League stage despite the fact he was little more than a collection of words in Mourinho’s subconscious this time last week.

After journalists accused Mourinho of failing to make full use of Chelsea’s youth system, the Special One immediately hit back by announcing he would give a youth player a chance against Sporting.

When asked to name the player in question, the Portuguese boss became agitated but eventually named Loftus-Cheek after seeming to look around the room for inspiration.

Many felt it was a gamble to pick Loftus-Cheek ahead of more established squad players and indeed more realistic made-up players such as fictional left-back Ryan Bagley, who is seen as a great talent for the future.

“Ruben didn’t get on for long, but he did great,” Mourinho told FourFourTwo.

“Considering his lack of experience, having been plucked out of thin air for rhetorical purposes just 48 hours ago, he really looked the part.

“People say Chelsea doesn’t produce young talent, but this just goes to show that if you give me a few minutes, a pencil and some paper, I’ll whip up a whole team.

“Let’s see, we’ve got Ashley Vicarage-Nostril coming through at right-back, Jordan Selhurst-Earlobe is a decent young striker and Craig Stadium-of-Light-Scrotum will be a fantastic keeper one day.”

While some journalists have predicted a bright future for Loftus-Cheek, he may struggle to fulfil his potential until he actually exists and he risks going down the same path as Eric Djemba-Djemba, who turned out to be a misprint, or Florent Sinama-Pongolle, who was created by Gerard Houllier in order to win a bet.