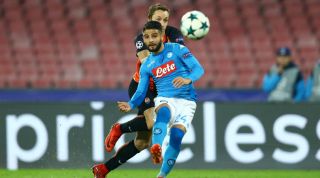 Serie A leaders Napoli beat the Ukrainian champions 3-0 at the Stadio San Paolo on Tuesday night, but it took them until the 56th minute to break the deadlock.

The wait was worth it, though, as Insigne – bizarrely ignored by former Italy boss Gian Piero Ventura during the Azzurri's World Cup play-off defeat to Italy – who provided the moment of magic that blew the game open.

The 26-year-old skipped around Shakhtar duo Bohdan Butko and Fred before unleashing a fierce curling strike that sailed into the top corner.

Piotr Zielinski and Dries Mertens struck in the space of two minutes (81' and 83') to ensure the free-scoring Italians remain in contention to qualify for the Champions League knockout stages.