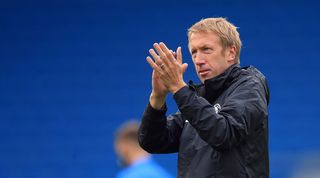 After Brighton's final match at the Amex Stadium before lockdown in March, Roy Hodgson said his Crystal Palace side’s 1-0 away win was “remarkable”. He was acknowledging how, once again, Brighton had flattered to deceive in a vital match.

Despite being very easy on the eye all campaign, the Seagulls were sat just a single point above the relegation zone with 10 games to go, the only team without a win in 2020 and facing a daunting run-in.

Yet, three months prior, Graham Potter’s contract as head coach had been extended from 2023 to 2025 – and he’d been appointed only that summer. There had been eye-catching early performances, including a 3-0 defeat of Spurs with two goals from a teenage Aaron Connolly, but the wins had dried up.

The pledge by owner Tony Bloom for Brighton to become a top-10 team, and his belief in the somewhat inexperienced Potter to get them there, looked like hubris.

But was it? Off the pitch, everything is in place. The club’s setup rivals those of the top-six clubs, featuring two of football’s finest administrators in technical director Dan Ashworth – poached from the FA last year – and chief executive Paul Barber, who earned more praise for his leadership during lockdown.

The club’s facilities, including their celebrated stadium and plush training ground in Lancing, are state of the art. Furthermore, it’s Brighton – alongside the usual suspects such as Chelsea – who Championship contenders are relying upon for under-23 loanees to boost promotion challenges, as Leeds did successfully with Ben White last season.

On the pitch, however, there are fine lines still.

Brighton hardly waltzed to safety, with 41 points and, for the third season in a row, only nine wins. Potter showed he has the tactical flexibility to lead them out of a sticky patch, though, as being prepared to take an ugly draw on the road became a welcome habit.

Ashworth’s recruitment model is deft rather than disruptive. Brighton won’t – can’t – pay top-10 wages. They aim to pick up English talent in the spring and autumn of their careers: see Tariq Lamptey (19) in January and Adam Lallana (32) in July. Meanwhile, Joel Veltman cost just £900,000 to sign from Ajax.

In an environment characterised by short-termism, Albion’s top-half project is a long-term vision. Fans know that Bloom, a lifetime supporter and the club’s canny owner for over a decade now, won’t be shaken from his goal... even by a defeat to Crystal Palace.