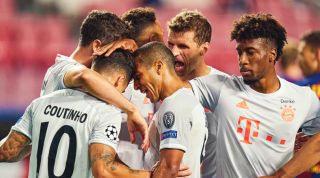 Five minutes on the clock, 50 players to guess.

NOW TRY Quiz! Can you name every Champions League semi-finalist since 1994?

Bayern Munich and Paris Saint-Germain are two heavyweights of the European game.

Though both sides are longterm conquerors of their respected leagues, however, there's a whole lot of history at Bayern that PSG don't have. The Parisiens were just four years old when Die Roten were lifting their first European Cup. They've had a player in every World Cup final since 1982, too.

Power shifts, though. The last World Cup belonged to Kylian Mbappe and in recent years, PSG have constructed a squad with excitement, experience and let's face it, some of nicest kits on the continent. Is Europe theirs for the taking yet?

In expectation of tomorrow's Hollywood clash, we've listed 50 footballers who might have played for either side, both or neither. Can you remember which one?