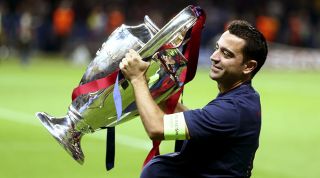 Barcelona have rather enjoyed themselves in this competition, having won the thing four times since The Big Rebrand. They scooped the last of the European Cups too, with Johan Cruyff’s esteemed Dream Team laying their hands on Ol’ Big Ears in 1992.

Below are the 50 players who’ve turned out for Barça most in the Champions League over the last 26 years. Many are modern, we’re sure you’ll be thrilled to hear; some stretch back into the ‘90s.

After getting spanked 4-0 by Milan in the 1994 final, it took the Catalans another 13 years to make it there again – from whence their period of dominance began.

We’ve put 10 minutes on the clock for you to name as many of these Barça heroes as you can, and then want you to tell us how you got on @FourFourTwo. (Don’t reveal answers, though, else that’d be daft.) Why not challenge a few pals too?