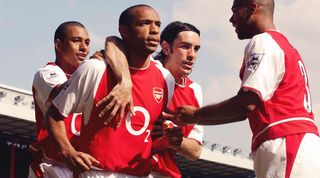 You've got five minutes on the clock to try and name as many of the 49 clubs we're looking for.

Sixteen years ago today, Arsene Wenger's Arsenal completed one of the biggest achievements in English football.

The Invincibles is still talked about these days. At the start of every season, a conversation begins about which side could potentially emulate that great Arsenal team; none have yet.

But perhaps the most remarkable thing about the 49ers was just how stylish they were. They didn't grind out results with ten men behind the ball: Arsenal had a combination of flair and imagination that few sides have had since. Dennis Bergkamp, Thierry Henry and Robert Pires all played their part. It was scintillating football, week after week.

Of course, Manchester United were the 50th opponents the Gunners were to face. But can you remember every side they faced on that immortal run?