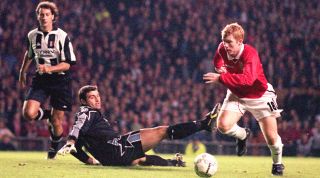 Xavi said that he wished he'd played with him. Cristiano Ronaldo was gobsmacked by his talent. Sven-Goran Eriksson thought he was the best left-winger at his disposal (probably).

Paul Scholes is the kind of midfielder that England haven't produced very often. One of the finest passers of his generation and seemingly ego-less. He didn't even ask for his old squad number when he came out of retirement.

Scholesy scored over 150 goals for United in the two spells he spent at the club - and he no intention of ever leaving for anyone else.

So can you tell us who those goals came against?