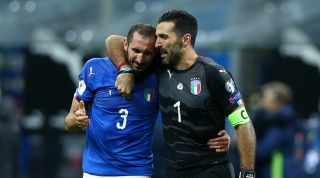 Legends do not come much bigger than Gianluigi Buffon.

When we considered a goalkeepers special, there was only one man we wanted to front it: the Azzurri legend of almost 900 club appearances, a ludicrous 176 caps and 16 major honours.

The goalkeeper who somehow managed to make a world record fee for a glovesman in 2001 – one that stood for 17 years – look like a bargain. And aged 40, he’s still going strong.

In our wide-ranging interview, Gigi opens up on the evolution of goalkeepers, the perils of social media, transfer fees and being the last of the ‘proper’ stoppers. We hope you’ll agree that it’s a fascinating read.

For today’s quiz we’re simply after the 50 players Buffon called team-mates most frequently over his 23-year career. You shan’t be too surprised to hear that no PSG stars feature, but we’ll try that one again when Gigi’s still playing at 50...