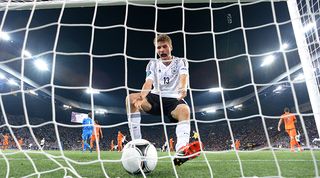 Who saw this coming? As we nudge towards 2019, Holland have their greatest chance yet of proving to the world that they’re a force to be reckoned with once more.

With a sea of orange inexplicably absent at the last two major tournaments, Ronald Koeman’s rebooted team stand on the verge of a place in the UEFA Nations League finals next summer, having outfought expectations in a group containing the current and previous World Cup holders. Brilliant orange indeed.

A point against bottom side Germany would ensure the Dutch safe passage to a semi-final showdown with either England, Portugal or Switzerland, and prolong the misery of Joachim Löw’s winless ex-world champs who have already suffered their record number of losses for a calendar year.

For today’s quiz, we’re after the men who played in their most recent outing at a major tournament – Euro 2012 in Poland and Ukraine, where Holland crashed out without a point and their group-mates suffered semi-final anguish against Italy. One German hit a brace in their 2-1 win – but can you remember who?

When you're done, tell us your scores @FourFourTwo and we'll add you to our daily leaderboard if you make the cut.

THEN READ... The 11 most uninspiring Premier League mid-season manager appointments

(Please note: Adblockers can sometimes play mischief and block our quizzes, so you might want to turn them off to avoid disappointment. Cheers.)