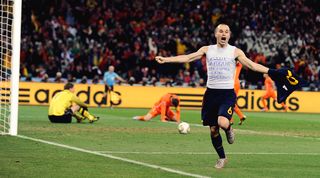 It was the greatest moment in the history of Spanish football.

After nearly two hours of battling against a Netherlands side determined to chop the ankles off their opponents, Andres Iniesta found some space in on goal. He didn't score often - for club or country - but the Barcelona midfielder managed to slot home the only goal of the 2010 World Cup final.

Today, Iniesta turns 36. He's now playing his club football in Japan and most of that squad are either seasoned veterans of their respective clubs or have retired altogether.

Can you remember the other members of that historic Spanish squad? There are some big names on the list - we've given you their position and the club they turned out for at the time, just to help.