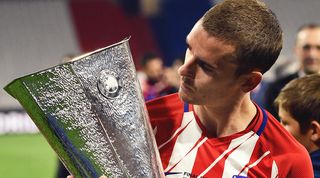 NOW TRY Quiz! Can you guess 60 correct answers in the ultimate PSG quiz?

Think of Atletico Madrid and the same few things come to mind.

Diego Simeone and his famous Paddington Bear stare on the touchline. The rigid 4-4-2 - hard-tackling and solid as hell. The occasional stars with their silly celebrations. The ability to replace absolutely anyone.

They're a mainstay in European football these days, too. Tonight, El Cholo's army goes up against Julian Nagelsmann's RB Leipzig, for a place in the last four of the tournament - and who would bet against them?

They made the final in 2014 and 2016 - losing both to arch-rivals Real Madrid. Two years ago, it was the Europa League that they conquered. Perhaps we'll see them in another European final on another even year...