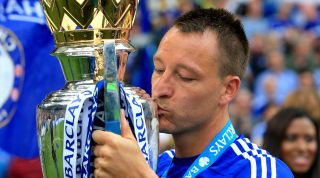 We don't make The Rules over who gets a medal when a club wins the Premier League. Not even Roman Abramovich controls that (we don't think). It used to be players who'd appeared in 10 games, then it was reduced to five games for 2012/13 – but even then a special dispensation can be applied for, as one Chelsea goalkeeper has discovered. But we've already said too much.

A total of 60 players have officially won the Premier League with Chelsea. Only one player has been there for all five (and if you can't get him, you're in a world of trouble), while 33 may be trickier, having won just the one title while at the club.

We've provided clues in the season of their title win(s) and playing position. So just fill in the surnames then let us know how you get on @FourFourTwo – we'll retweet your scores (just don't give away answers). And if you're a sucker for this kind of challenge, see if you can name all 86 players who've won the Premier League with Manchester United as well. Good luck.

(Note: Adblockers may stop you seeing these quizzes, so you please turn them off. Thanks!)