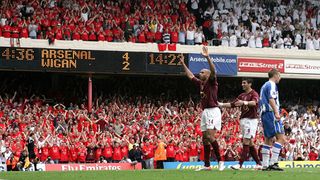 Alvaro Morata became the 17th different player to score a Premier League hat-trick for Chelsea this weekend, but the Blues are still second behind their London rivals in those stakes. No club in the post-1992 era has had a greater variety of hat-trick grabbers than Arsenal with 19.

In fact, the north Londoners are the treble kings of the Premier League: with 38 total hat-tricks to their name, no club has more (Liverpool are second with 36, while Manchester United have 32).

All we’re asking from you is to name the 19 players responsible for those Arsenal hat-tricks (and one of them went above and beyond by turning his hat-trick into a four-goal haul).

Five minutes are on the clock; total trebles and opponents scored against are below. Get quizzing, then let us know how you did @FourFourTwo (we’ll retweet the best scores, if you don’t give any answers away). Challenge some pals too while you’re at it.