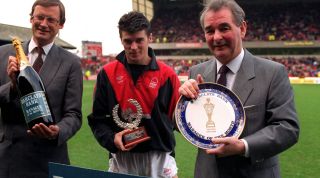 It was full-time at the City Ground and Brian Clough had just punched Roy Keane in the face. Keane’s sin had been merely technical – his under-hit backpass had led to the concession of a late equaliser – but his punishment was resoundingly physical. Sprawled on the dressing room floor, Keane’s response was not to make a beeline for the nearest no-win-no-fee lawyer, but simply to nod in agreement. “Being knocked down by Clough was part of my learning curve. I didn’t hold it against him,” he later wrote.

The episode is significant not only as an insight into one of elite-level sport’s most ludicrously self-punishing psyches, but also because Keane has often cited Clough’s man-management to be the X-factor which elevated him above Alex Ferguson in the managerial pantheon. Ferguson was “driven and ruthless”, Keane wrote, while “Clough’s warmth was genuine,” the latter edging out his fellow great as a result. Keane may not be neutral on the issue, but few men are better-placed to make the judgement.

An arm around the shoulder

The notion of man-management was raised again this week with the serialisation of Steven Gerrard’s autobiography, in which Beverly Hills’ latest inmate discusses the relative merits of his former managers. His appraisal of one particular boss has grabbed the most headlines.

“I don't think Rafa Benitez liked me as a person,” writes Gerrard. “At press conferences he might call other players by their first name but I was always 'Gerrard'. It was the same in the dressing room.”

Benitez’s failure to treat Gerrard with the rightful reverence is clearly something that still grates with the player, which in itself is an interesting thing. The presumption lying within Gerrard’s assessment of Benitez – which runs in direct parallel Keane’s of Ferguson – is that this lack of warmth is some grand managerial failing. It stands in direct contrast to his words on Brendan Rodgers, of whom Gerrard says: “His man-management was excellent, generous and imaginative” – a passage that not only veers dangerously close to EL James territory, but unwittingly raises the question of how important the whole idea of ‘man-management’ actually is.

After all, in three years under the personable Rodgers, Gerrard’s form fluctuated wildly. Conversely, in five seasons under the “emotionless and distant” Benitez, Gerrard won two major trophies, got to another European Cup final, pocketed Player of the Year awards from both writers and peers and played the most scintillating football of his career. Keane, similarly, spent his years under Ferguson picking up trophies like they were stray pennies. Neither man felt adored by their boss; both were irrepressible under him.

“As a manager I would take Clough’s warmth and Ferguson’s ruthlessness and put them in the mix,” says Keane, while Gerrard chips in with much the same: “I'd try to fuse the best of Rafa's tactical thinking with Brendan's skill as a man-manager.”

Both men’s formulas seem predicated on the theory that feeling loved and playing well function in perfect tandem. But both careers are clear proof this is not necessarily the case. Indeed, with Keane and Gerrard both being players fuelled largely by rage, angst and self-doubt, one suspects that filling them with the warm embrace of self-assurance may have been among the worst things a manager could have done. Certainly, top-level football management does involve a degree of ego-pandering. Ferguson, notorious disciplinarian, famously elected not to reprimand Eric Cantona for turning up to a formal civic function in garish casual wear so as not to upset the Frenchman’s kingly aura. A quick glance at the Old Trafford trophy cabinet shows that it was a masterful playing of the long game.

“[Managers] need to nurture stars and keep them on board,” Gerard Houllier once said. "To get inside their heads to work out what makes them tick. That is the manager’s job." And if we disregard for a moment that this is the man who accused David Ginola of “sending an Exocet missile through the heart of French football” by mishitting a cross a couple of decades back, Houllier is most likely right.

But to what extent he is right is debatable. Everyone is some shade of narcissist – we all like to be liked – and everyone wants to feel appreciated. But listening to the footballer's side of the story, there appears a danger for gratuitous indulgence and effective management to be mistaken for one and the same.

Communication not so key

Rodgers' conquerer last weekend is another whose methods of communication have been subject to forensic scrutiny of late. Louis van Gaal flatly denied accusations of autocracy last week after reports of training-ground dissatisfaction among his squad found their way to the back pages.

“I am not a dictator, I am a communicator,” was Van Gaal’s self-appraisal, although one imagines Victor Valdes (or Rafael da Silva, or Angel Di Maria, or Rivaldo) may offer slightly different verdicts.

Writing in The Telegraph last week, Gary Neville referenced these fallings out and spoke disparagingly of Van Gaal’s apparent "coldness" with his players. “He can’t keep being abrupt with every journalist and broadcaster in press conferences,” Neville wrote.

Barcelona hero Xavi, who was handed his debut under the Dutchman, recently attested to his old manager's version of the story. "I will always remember Van Gaal and for the right reasons," he told Marca. "He was a direct guy. One day he would humiliate you in front of the entire team and the following day he would make you feel like [Zinedine] Zidane. He was like that. And it was a good thing in the long term."

If such a judgement brings to mind another man then it's no coincidence. Both Benitez and Van Gaal – judging by their media appearances, at least – both seem to be cut from the same cloth of the technocratic work-obsessive. They both seem – and in the nicest possible way – a little bit weird.

You imagine they are infinitely more at ease next to a tactics board than at a dinner party. Benitez may not be one to belt out terrace chants in his press conferences, but you sense that each man interprets his job to be tactician rather than clinician, organiser rather than galvaniser.

And yet the two have 23 major honours between them, won across five countries. Which isn’t to say that improved people skills wouldn’t have made their careers even more successful, but it does cast some doubt over the idea of man-management being a critical cornerstone of the job requirement.

Clough, of course, announced his arrival at Leeds by telling his title-winning squad that their hard-earned medals belonged in the bin. He informed star winger Eddie Gray that if he were a racehorse, he’d have been shot long ago, and self-styled brute Norman Hunter that, really, he yearned to be loved.

Clough – to many the doyen of man-management – alienated his troops in a manner Benitez and Van Gaal could only dream of, not so much losing the dressing room as lining the walls with explosives and rolling a couple of hand grenades through the door. He was clearing his desk the following month.

The episode proves the impossibility of being all things to all men. Clough’s strength was as a motivator, but the extreme tactics needed to foster extreme motivation can work both ways. Not all players respond to a punch in the face with a renewed drive for self-improvement and, as the staff at Wernam Hogg would attest, ill-judged motivational habits are a whole lot worse than none at all.

People skills are a handy tool, but if they aren’t your domain in the first place, perhaps it’s best to sidestep them. As Benitez and Van Gaal have proven, man-management is no prerequisite to amassing medals.