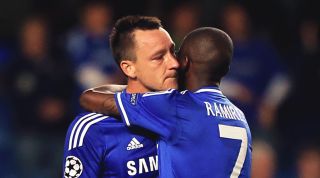 Former Chelsea midfielder Ramires has explained why John Terry wore full kit to lift the Champions League trophy in 2012, despite missing the final through suspension.

Ramires, now with Palmeiras, scored a crucial goal in Chelsea’s semi-final second leg draw in Barcelona, but missed the final after receiving a booking in the same game.

Terry picked up a straight red card for an off-the-ball foul on Alexis Sanchez in the first half, and was suspended for the final at the Allianz Arena in May.

Chelsea beat Bayern on penalties in Munich after they played out a 1-1 draw, but Terry sparked derision after lifting the trophy in full kit.

But Ramires, 32, has revealed that the decision was not Terry’s to make.

“All of us changed post-match,” the Brazilian told the May issue of FourFourTwo. “The idea came from the club, because they wanted everyone ready for the team photo.”

Chelsea and Bayern played out a tense affair until Thomas Muller put Jupp Heynckes’ men ahead in the 83rd minute.

Didier Drogba equalised from a corner five minutes later, and Arjen Robben’s missed spot-kick in extra time meant a dogged Chelsea could hold on for penalties.

Heroics from Drogba and Petr Cech saw a makeshift side including Ryan Bertrand and Jose Bosingwa clinch a remarkable victory for caretaker manager Roberto Di Matteo.

Ramires recounted the rollercoaster of emotions he encountered watching the action alongside his suspended captain.

“I was really nervous! I kicked things,” he admitted. “I screamed, I cursed. When Bayern scored, it was past the 80th minute and some fans started to take the piss.

“But when Drogba scored, let’s say we had revenge. It was a happiness explosion! Terry stood up on the seat to celebrate.

“When it came to Drogba for the last penalty I was very confident - he was our best taker. We were over the moon at full-time.”

Ramires’ fluctuating emotions mirrored his feelings following the semi-final at the Camp Nou.

Sky Sports reporter Geoff Shreeves famously appeared to break news of his suspension to Branislav Ivanovic, and the Brazilian admitted that several players hadn’t realised they were to miss the final.

“I didn’t think about it and honestly didn’t even realise,” he said. “I only knew that I couldn’t play afterwards, when we got into the dressing room.

“Everyone was celebrating and someone said Terry, Ivanovic, Raul Meireles and me were out of the final.”

“When it came to Drogba for the last penalty I was very confident - he was our best taker. We were over the moon at full-time.”

Read the full interview with Ramires in the May 2020 issue of FourFourTwo magazine, available in shops and online from Wednesday, April 1. Our new magazine looks at how Cristiano Ronaldo came to the brink of setting an all-time international goalscoring record, reveals the 50 best players in the EFL, looks back on Marco van Basten and Euro 88, brings you the inside story from Greece’s unlikely victory at Euro 2004, takes in the rise of Bruno Fernandes and the fall of Michel Platini, and discovers the background of Bucharest’s brutal derby. We also chat to Andy Cole, Lukas Podolski, Micky Quinn and more