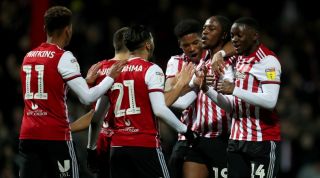 We’ve already shown you what the Premier League table would look like if a season ran from January 1, 2010 to December 31, 2019.

Doing the same for the Football League is a little more difficult. For one, there are three leagues, rather than one – and if you’re good enough, eventually you’ll get promoted out of it.

But that all serves to make it a little more exciting, too.

So we fired up the Special Maths Machine™ again, entered all 97 sides to have played in the EFL this past decade, and got on with our important calculations.

Below you’ll find the full table of our results, but here’s some of the most interesting findings.

Brentford have topped the table, with a fine haul of 713 points. They’ve never quite managed to make it to the Premier League yet, but have had a promotion to the Championship and a couple of unsuccessful play-off campaigns over the past 10 years.

While they’re the top side not to make it out of the EFL, Swindon, Wycombe, Shrewsbury and Accrington all do well without having broken into the Championship in the 2010s.

At the other end, Morecambe have the lowest points total of anyone to spend the whole decade in the Football League, just behind Oldham and Coventry.

Every Premier League team of the 2010s, by total points

Given some teams have been good enough to get out of the EFL, it’s only fair to look at the points per game (PPG) average too: Newcastle tops the table then, with 2.13 PPG, ahead of Southampton (1.97), West Brom (1.88) and West Ham (1.87). The team with the highest PPG not to have made it to the Premier League in the last decade is twice-promoted Luton (ninth place, 1.62 PPG), who were in non-league until 2014.

The award for Surprising Consistency goes to Crystal Palace, whose PPG has been exactly the same in the Premier League as in the Football League, with 1.17.

On a similar note, the award for Oh Boy, You’re Really Getting Worse goes to Stoke, who amassed only 1.07 PPG in the Football League, compared to 1.21 in the Premier League. The Potters have the lowest points per game of any team relegated from the Premier League, behind even Bolton.

Finally, Hull get a special mention for bringing in exactly 442 points over the course of 10 years.

RANKED The 10 best Premier League managers of the decade