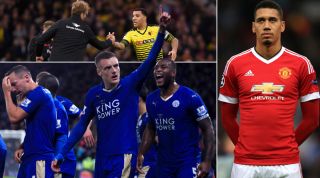 The dominant storyline in this season’s Premier League has been the so-called ‘rise of the middle class’. That’s not, in fact, the title of the least terrifying horror movie ever made, but the common shorthand for the new degree of upward mobility that’s opened up the Premier League.

So far it’s been best represented by the likes of West Ham, Crystal Palace and Stoke – clubs who many predicted would be looking anxiously over their shoulders but have instead spent the campaign ambling merrily uphill, felling their superiors and training their crosshairs on the top six.

As with most phenomena, this development can largely be explained by cold, hard cash. TV cash, specifically – sloshing freely around the division as never before due to the Premier League’s new broadcasting deal. It’s what's enabled the above three clubs to buy Dimitri Payet, Yohan Cabaye and Xherdan Shaqiri respectively – individuals whose sprinkling of genius has made all the difference to an otherwise unremarkable product, a bit like Bill Murray’s performance in Groundhog Day.

It would appear a paradox, then, at a time of such prosperity and globalised recruitment strategies, that so many of the season’s success stories centre on lower-league graduates making the big time.

Leicester's Jamie Vardy, ex-Stocksbridge Park Steels striker and currently the Premier League’s joint-top scorer, is the most obvious case in point here, but he is far from alone in his ascent.

Dele Alli, whose fearless drives and mass nutmeggings from midfield have provided much of the inspiration for Tottenham's impressive campaign, has made the jump from third tier to first with little regard for the notion of adaptation. Troy Deeney, barrel-chested captain of freewheeling newcomers Watford, spent time in English football’s second, third and seventh tiers before moving to Vicarage Road. One of the few Manchester United players who can claim to be doing a good job this term, Chris Smalling, started life in the semi-professional Isthmian League with Maidstone United.

There are more. Duncan Watmore, whose diligence has earned him the backing of the Sunderland crowd as well as a first-class degree, was playing for Altrincham in the Conference North just three years ago, while Matt Ritchie has, at just 26, already spent the best part of a decade yo-yoing around the Football League’s top four divisions in tandem with his Bournemouth team-mate Callum Wilson.

Factor in the likes of Craig Dawson and Ashley Williams – both ever-presents this term, and with over 150 non-league outings between them – and Joe Hart, perhaps the most sustained success of the current lower-league graduates, and the Golden Generation tag doesn’t seem too much of an overstatement.

Talent to the top

The phenomenon has been taken to extremes at Palace, where no fewer than 10 first-teamers have spent significant time in the third tier or below. And this is the club whose beating of Roma and Atletico Madrid to the big-money signing of Cabaye, and subsequent clamber up the table, has typified the mid-rankers’ aspirational affluence.

Palace are showing that, despite existing in direct opposition, these two approaches to recruitment are not mutually exclusive. Indeed, Jason Puncheon and Yannick Bolasie, whose careers include stints at Fisher Athletic, Lewes FC and Rushden & Diamonds, have been two of the club’s standout players in recent times, their spark having been elevated by Cabaye’s excellence rather than shown up by it.

But while the newfound mobility within the top flight can only be a good thing for the league’s competitiveness, it is a phenomenon facilitated by bestowed wealth rather than honest endeavour, gifted rather than earned.

These players, on the other hand, are proof that on an individual level football remains a pure meritocracy. Say what you like about professional players (and plenty of people do) but their industry is one of very few in which status is gained from performance and performance alone. The ones at the top are there because they deserve to be.

End of the road?

How much longer this pathway to the Premier League will remain viable for lower-league players remains to be seen. Palace seem to have hit on a winning formula by using costly continental stardust to supplement, rather than supplant, a contingent of cut-price, home-grown toilers. But if that suggests the two things can continue to coexist, then we must also consider a future in which the TV money continues to flow – and therefore demands to be spent.

With the new deal still in its nascent stages, the league’s mid-rankers have so far been limited to recruiting their heavyweights on a fairly rigid one-per-club basis, but there’s no reason why they’ll continue to do so if they don’t have to. Recent history suggests that if foreign megastars can be afforded, they will be bought.

Should, for instance, Juan Iturbe prove a success at Bournemouth, his place in the side next term would likely come at the expense of Ritchie (ex-Dagenham & Redbridge) or Wilson (ex-Kettering). Likewise, Palace are rumoured to be considering a £15m bid for Sporting Lisbon’s Islam Slimani – a signing that would likely spell the end for one-time Bishops’s Stortford striker Dwight Gayle. It may simply be the case that the phenomenon of players being able to climb the football pyramid all the way to the top has peaked at the exact time that it begins to die out.

But perhaps not. The fact that the vast majority of the current crop were given their big break by British managers – of the above names, Alli is the only outlier – gives rise to the notion that as long as there are native coaches at the top level, the path from the lower reaches will remain open. Call it parochialism, call it adventurousness, call it in-depth knowledge of their country – the trend for British bosses to promote from below keeps the dream alive for many a lower-league grafter.

More broadly, it could be that a lower-league CV can in fact work in a player’s favour. It’s no leap to assume that years of unglamorous exertion might lessen the chances of the type of prima donna behaviour that star names can bring and that managers have little time for. Rickie Lambert, who spent 13 seasons in the third and fourth tiers, did a hell of a lot more for Southampton than Dani Osvaldo, a £13m import from Serie A. Or, as Puncheon put it last month: “All that time in the lower leagues made me more determined. I wouldn’t want to change the way I got to this level.”

Whether it’s real or perceived (and the qualities shared by Vardy, Watmore and Deeney certainly suggest the former), the ‘British-style’ grit and endeavour which a lower-league alumnus tends to provide can often be seen as a safer option than a ‘wild card’ from abroad. The technical class of Alli, meanwhile, is proof that an apprenticeship in the Football League can instil craft as well as graft.

There would certainly be an unpleasant irony if the Premier League’s newfound upward mobility at club level were to spell the end for a similar freedom of movement currently enjoyed by players; the ascent of the minnows looks a tad less romantic when it’s billed as inherited wealth shutting off the pathway from rags to riches. But while that seems the likely outcome at first glance, the real picture is slightly more nuanced. Don’t close the book on the rags-to-riches tale just yet.