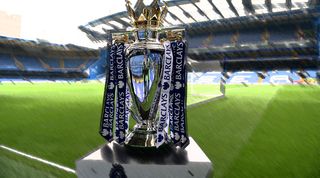 The 2015/16 Premier League season has been wonderfully bonkers, but it’s becoming increasingly clear who’s realistically in with a shout of lifting the silverware in May.

Manchester United have surely been Paul Dummett-ed out of contention for good, meaning it’s the present top-four inhabitants who can harbour serious aspirations for the title. And yes, that includes Leicester, despite the Foxes’ regular spiel about reaching 40 points and safety (which they’ve now comfortably surpassed).

The remaining fixtures featuring Manchester City, Arsenal, Spurs and Leicester will be hyped as ‘title deciders’ with good reason, but these are just some of the key clashes that lie in wait...

Man City’s thrashing of a beleaguered Sunderland last season finally ended a remarkable run of four consecutive 1-0 losses at the Stadium of Light. Yet City are hardly setting the world alight on the road this term, and this fixture still presents a bogey opponent who will sit deep and hurl Big Sam missiles at a defence prone to panic without their leader Vincent Kompany.

Facing an in-form Ozil & Co. at the Emirates Stadium is a daunting task at the best of times, but this completes a hellish fortnight for the Foxes who will have already hosted Liverpool and travelled to the Etihad. With so much of Leicester’s success built on high-intensity pressing and gusto, might this be one big game too many in such a short space of time?

The Gunners inflicted one of their only two defeats this season, romping to a 5-2 win at the King Power, but this comes three days before a massive Champions League first leg against Barcelona.

Should Tottenham reach the fifth round of the FA Cup (possible with Colchester to come if they beat Leicester in their third-round replay), they’ll find late February is when the fixtures pile up and begin to truly test Mauricio Pochettino’s young squad.

That game would be sandwiched between a Europa League double header with Fiorentina, which in turn is swiftly followed by a league encounter with Swansea three days later. Only three days after that is a potentially fiery midweek test at the Boleyn Ground.

West Ham enjoy getting one over on their close London rivals, something they did three times in 2013/14 but failed to manage last season. With Slaven Bilic’s men chasing a European spot themselves, will a weary Spurs midfield be up to the task?

With a cruel lack of respite, the fixture list throws up a spicy north London derby just three short days after Spurs’ West Ham tussle, a full-blooded affair that will greatly determine their title credentials if they’re still standing by this point.

Expect the newspapers to ramp up the pre-match hyperbole to Thrilla in Manila proportions. Expect a red card or two. Expect a cranked-up, adrenaline-fuelled slanging fest to end in an underwhelming goalless stalemate.

City may have recently comfortably beaten the Canaries with a weakened side in the cup, but Norwich’s desperation to avoid being dragged into a relegation scrap makes this a very different proposition.

Arsenal’s Champions League second-leg trip to the Camp Nou will inevitably mean 90 minutes of being pulled here, there and everywhere by the supernatural trio of Neymar, Luis Suarez and Lionel Messi. It could be spirit-sapping, potentially soul-crushing and utterly exhausting.

But the Gunners will have just three days to get themselves right before enduring a tough-looking trip to face Everton at Goodison Park, where they came from two goals down late to draw last season and were humiliated 3-0 in 2013/14.

The last five fixtures between these sides have resulted in an aggregate scoreline of 15-2 in Liverpool’s favour, so even the Reds’ shot-shy selection up front might fancy their chances here. That eye-watering total includes a 5-0 thumping at White Hart Lane which preceded a 4-0 Anfield thrashing in 2013/14, followed by another 3-0 loss on Merseyside last term.

Spurs have traditionally fared badly at Anfield, with a famous 73-year hoodoo that spanned from the Titanic sinking in 1912 to the mid-eighties. That may now be a distant memory, but the recent wallopings aren’t.

It’s not the wildest of predictions to foresee a revival of fortunes for Chelsea under Guus Hiddink, with the title holders keen to apply some late gloss to what has been a terrible campaign so far. The Blues will certainly be relishing this one, having not been defeated by Spurs in the league at the Bridge since 1990.

If Pochettino’s side are within touching distance of the crown with three games to go, not only would it mark an incredible season but it would make for a mammoth encounter here, with a famous victory needed to move them closer to the title still.

By this point, both clubs may have wished they’d streaked ahead of the rest amid the confusion and panic of a baffling season. Maybe they did, and they’re just saving their legs for a Mo Farah-like dash to the finish line.

Even so, it’s up for grabs now and perfectly conceivable that Kompany or Per Mertesacker will be lifting the trophy shortly after the final whistle to either a packed or largely deserted Etihad Stadium. In fact, let’s allow ourselves a little reverie: in a winner-takes-all scenario it’s 0-0 with 89 minutes on the clock, and up steps a mysterious figure to join Michael Thomas and Sergio Aguero as a last-gasp title clincher.

RECOMMENDED The best ever title finish? Arsenal's 1989 triumph over Liverpool, told by the players