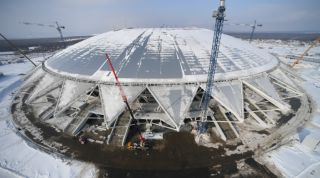 According to Reuters only a few weeks ago, a recent FIFA inspection concluded that "a huge amount of work" was needed before the $315m stadium would be completed.

But deputy prime minister Arkady Dvorkovich says the ground will be done by April 25, which is three days before a Russian second-tier match between Krylya Sovetov and Fakel Voronezh is due to be played there as a test run for the new 45,000-seater arena.

The necessary structure may be in place, but 70 per cent of the stadium's facilities won't be ready.

"Everything else will be finished later," an unnamed official told Russian daily newspaper Kommersant. Apparently, drainage, sewage and the power grid systems are "clearly not conforming to the design.

EFL tells Accrington's owner he must buy his players burgers if they win, lose or draw

A dedicated Wolves fan has recreated Molineux Stadium out of matchsticks​

“They clearly saved money on that... the stadium will still be handed off, but it’s unclear what to do with it after the World Cup."

According to the Moscow Times, Russia's Minister of Sport Pavel Kolobkov estimates that maintenance costs for the stadium could be around 200 million rubles per year (£2.44m).

We don't envy whoever catches that bill after the tournament...