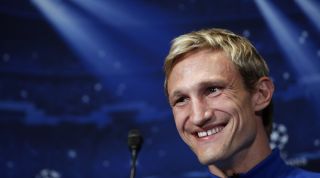 Goalkeeper
Peter Schmeichel
He had a great career, but unfortunately most of his successful years were at Manchester United! He was a sensational goalkeeper and one of the big reasons why they were so successful.

Left-back
Bixente Lizarazu
He was a very solid left-back and always went forward to join the attack. I think he was one of the best left-backs of his time, certainly the best I faced.

Centre-back
Lucio
I remember one game here in Leverkusen when I was playing for Liverpool (in 2001/02) and we were knocked out of the Champions League. He scored the winning goal and we lost 4-3 on aggregate. That was his best season at Leverkusen, and from that point on he went from strength to strength and became a very good centre back.

Right-back
Cafu
I remember playing against Roma and he was always flying up the wing to join the attack. Maybe defending wasn’t his biggest strength, but he was up and down that right flank for 90 minutes.

Central midfield
Steven Gerrard
I can include him because I played against him with the national team! Of course he can also get forward as well, but he has all the qualities to defend. He has everything that a central midfielder needs to be a top player: he can shoot, he can pass, he can tackle, he can defend, he can run, he’s strong. He’s basically the complete player.

Central midfield
Rivaldo
I faced him when he was at Barcelona and he was a very difficult to player to play against. I remember playing against them in the UEFA Cup. We managed to win 1-0 at Anfield and I had a very good game against Rivaldo, but maybe he was just having a bad day!

Right wing
Cristiano Ronaldo
What more can I say about him? He’s a great goalscorer and very dangerous going forward.

Left wing
Ryan Giggs
He’s had a very long career at Man United and to his credit he’s played well every single season. He was a very tricky player to player against because of his dribbling skills. And now that he’s a bit older, his passing is better than it used to be. He might have lost a little bit of pace, but his passing has really improved.

Striker
Thierry Henry
He’s a great goalscorer and was very difficult to play against. I think that at his peak, he was the best player I ever faced. He was very, very good during those successful years at Arsenal.

Striker
Ronaldo
I faced Ronaldo back in 1995 when he was a youngster at PSV. I was still playing in Finland for MYPA, and we played them in the UEFA Cup. We managed to pick up a 1-1 draw in the first leg at home, but we knew it was going to be difficult in Eindhoven in the second game. Ronaldo scored four goals and we lost 7-1! He was the best of the best at that time. He was so quick and strong, he’d make chances for himself from nothing and he’d be a great strike partner for Thierry Henry.

Manager
Jupp Heynckes
He was my coach here for two years and now he’s managing Bayern Munich. He’s had a great career, he’s nearly 70 but he’s still going! It’s great to see that he still has the strength to carry on and I think that he would be the perfect coach to get the best out of this team.