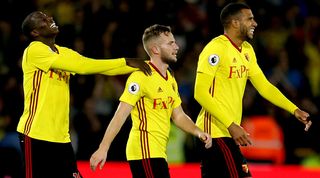 Arsenal missed a glorious chance to leapfrog Chelsea into the top four as Watford came from behind to win at Vicarage Road.

The Gunners had taken the lead through Per Mertesacker's first-half header, but were pegged back 20 minutes from time when Troy Deeney converted a penalty after Hector Bellerin was alleged to have brought down Richarlison. Many Arsenal fans won't have agreed.

Just before that, Mesut Ozil had missed a glorious chance - one he would later regret immensely when Tom Cleverley stole the points in injury time.

Chris Wood's 85th-minute equaliser rescued Burnley from an embarrassing defeat against West Ham, who played over an hour with 10 men at Turf Moor.

Andy Carroll was sent off for a second booking in the 27th minute, following up an elbow with another elbow to get an early bath from referee Stuart Atwell.

Michail Antonio had opened his account for the season only eight minutes earlier – and that Joe Hart got the assist for it will not have amused Sean Dyche. The England goalkeeper's punt upfield was missed by Ben Mee; Antonio, anticipating the error, pounced on the ball before rounding Nick Pope to open his account for 2017/18.

Burnley toiled to find an equaliser thereafter, and eventually got one when Wood powered in a header with five minutes remaining.

Crystal Palace got their first points – and goals – of the season with a brilliant win over Chelsea at Selhurst Park.

The Eagles soared off their perch and finally, after 731 painful minutes, scored their first Premier League goal of the season. It was a deserved lead inside only 11 minutes too, when Yohan Cabaye chested down in the box and then watched the ball take a deflection off Cesar Azpilicueta before going over the line.

Palace were undeterred by the setback, however, and restored their advantage on the stroke of half-time when returning fan favourite Zaha drove into the box to score after fine work from Palace stopper Mamadou Sakho. That's how it stayed in the second half – and Roy Hodgson gets his first win.

Nobody should really be surprised anymore. For the umpteenth occasion, Jose Mourinho took a team to a fellow title rival and came away with a point he was happy to earn.

Liverpool huffed and puffed without reward and will be unhappy to come away without victory, but they only truly tested David de Gea once; in the first half, when Joel Matip stabbed an effort at goal that United's Spanish goalkeeper saved exceptionally with his feet. Shortly after, Romelu Luaku – an isolated figure all game – fired straight at Simon Mignolet following some excellent build-up play.

That was the visitors' only chance of note all game. It was all Liverpool after the interval, but once again the Reds' lack of cutting edge left Jurgen Klopp scratching his head and gurning his way into the evening. This was very much two points dropped for the German's team.

Manchester City take a two-point advantage at the top of the Premier League after this thumping of Stoke at the Etihad Stadium.

Pep Guardiola's side raced into a three-goal lead inside 27 minutes courtesy of goals from Gabriel Jesus, Raheem Sterling and David Silva, and bragged 84% possession in the first half against their beleaguered visitors. Stoke, in fairness, had responded by reducing the deficit through Mame Biram Diouf just before the break.

They did more than that in the second half, taking the match to City from the restart and getting their reward when Diouf's (terrible) header bounced off Kyle Walker and in off the post.

Predictably, their hope was short-lived: Guardiola's side woke up and grabbed their fourth of the game when Jesus notched his second goal in converting a delicious cross from Kevin De Bruyne. It was five when Fernandinho rocketed in a beauty past Jack Butland, then six as Leroy Sane notched from a second De Bruyne assist.

Substitute Bernardo Silva made it 7-2 with just over 10 minutes remaining. Devastating.

Swansea grabbed their second win of the season, brushing aside Huddersfield with relative ease at the Liberty Stadium.

The hosts' opener came after a hideous moment of madness from Huddersfield goalkeeper Jonas Lössl who, three minutes before half-time, played a pass straight to Tom Carroll. Gleefully taking advantage of his gift, the ex-Spurs midfielder squared for Abraham to score his third league goal of the campaign.

Abraham had his and Swansea's second within three minutes of the restart when he jabbed in Andre Ayew's goalbound effort on the line.

Mauricio Pochettino will be pleased with a quiet win over Bournemout at Wembley – Tottenham's first home win in the Premier League this season.

Spurs couldn't break the deadlock before half-time but crumbled the Cherries' resolve soon into the second when Christian Eriksen delicately slotted in a terrific goal from 16 yards in the 47th minute.

Bournemouth did have chances to get something from the game, but couldn't beat Hugo Lloris and came away from London with nothing to show for their efforts.