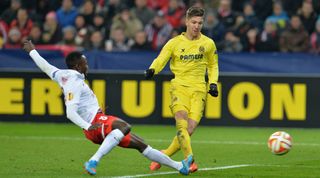 If first impressions are important in football, Argentinian striker Luciano Vietto couldn’t have done much better: on his full debut for Racing Club, the 18-year-old scored a perfect hat-trick.

His breakthrough season of 2012/13 produced 13 goals in 33 games, and since moving to Villarreal last summer he has adjusted with similar ease, bagging 18 in 33 so far – and increasing the interest from long-term suitors like Real Madrid and Liverpool.

Although that hat-trick debut was under Luis Zubeldía, it was Diego Simeone who signed Vietto and gave him his first taste of senior football from the bench before leaving for Atletico Madrid.

Having impressed for Argentina Under-20s in the South American Youth Championships, Vietto had a number of options before choosing Villarreal, former home of illustrious compatriots like Juan Román Riquelme and Rodolfo Arruabarrena.

The Yellow Submarine intended to introduce their €6 million signing gradually, but Vietto has forced their hand with 11 La Liga goals in 23 games (only 14 of them starts), plus seven more in 10 Europa League games.

He was La Liga’s Player of the Month for December, scoring against former mentor Simeone in Villarreal’s shock 1-0 win at the Vicente Calderón, ending Atletico Madrid’s 18-month unbeaten home record.

Vietto’s goals are helping Villarreal to a strong season – they’re sixth in La Liga and through to the Europa League quarter-finals – but adapting so quickly to the European game has alerted Real Madrid and Liverpool, each now tipped to bid for him in the summer. Both clubs tried to sign Vietto back in his Racing days, with the current European champions having an €8m bid denied.

With a frightening turn of pace, exemplary technique in possession, superb dribbling and movement off the ball that defies his young age, the 21-year-old has been compared to illustrious countryman Sergio Agüero – and for good reason.

Lethal in front of goal, predatory Vietto is happy as a box-dwelling No.9, but can also drop deeper to get involved in his side’s link-up play: he has a superlative range of passing and an eye for a killer ball.

With a non-stop work-rate and a positive attitude to boot, the potential for Vietto to become a fully-fledged Argentina international and household name globally in the not-too-distant future is there for all to see.

While working hard to close down opposition defenders, the Argentine can occasionally be over-zealous and has picked up bookings for clumsy challenges – although most managers would prefer a striker willing to graft than one who shirks his defensive responsibilities.

His slight frame means any potential move to the more physical Premier League would take some adjusting to, while at 5ft 8in he isn’t the greatest aerial threat.

That said, he’s the same height as Aguero and would positively tower over his idol Lionel Messi, and neither of those fellow Argentines appear to be intimidated by defenders.

Vietto’s agent Jorge Cysterszpiler – who knows a decent player when he sees one, having managed Maradona – has happily fed the rumour mill: “We know that a lot of big clubs are watching Vietto.

“There is a lot of competition for him. He could sign for Liverpool, we know that he is admired by the Reds, as well as Real Madrid and two Bundesliga clubs. I think he could leave Villarreal in the summer.”

Simeone has been full of praise for Vietto throughout his career, stating in 2011 that the striker "is fast, makes smart moves and shoots the ball well with both feet.” And although his protegé came back to haunt him at the Calderón in December, Cholo shared the young man’s joy: “Even though it has cost us the game, I am happy for Vietto. The goal indicates the quality he has.”

Despite the media attention he is receiving of late, the young striker is continually focused on improving his game and bettering himself.

"I think my creativity and speed are my strengths," he says. "But most of all, it's my work in the penalty area. I always try to get my shots on target. But I'm far from being a complete player. I'll keep working hard, day-to-day to improve."

Vietto’s rise is painful to watch for two Argentine clubs who rejected him. He was on the books at Estudiantes for two years, but they released him at 17 – and after failing a trial for Rosario Central, he considered giving up on football and concentrating on education.

However, Vietto’s family convinced him to try again and Simeone spotted him in a trial match. As the striker admitted last year, "Simeone trusted me, and I will be thankful to him for the rest of my life."

In the short term, Vietto will look to retain a regular starting berth at Villarreal and justify the sizeable hype surrounding him by continuing recent impressive form in front of goal. The ambitious El Madrigal outfit appears to be the ideal place for the South American to continue his evolution and somewhere he can get regular action both in La Liga and in Europe.

However, despite having signed a five-year deal with the Yellow Submarine last summer, the allure of some of Europe’s top clubs will certainly be enticing for a player with grand ambitions.

With Villarreal set to struggle to repel any potential advances by the likes of Real Madrid or Liverpool, Vietto’s imperious debut campaign in Europe could well lead him to one of the continent’s major teams this summer.