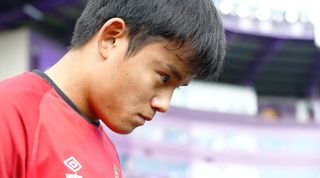 Takefusa Kubo’s first La Liga goal was a peach. It was also important. Mallorca had really been gifted their lead against Villarreal courtesy of two charitable penalties, but after the visitors converted one of their own at the beginning of the second half, the game’s momentum was threatening to turn.

But Kubo intervened. He received the ball on the crest of the D, dropped a shoulder and shimmied past his marker, and then lashed his shot across goal and into the net. A slight deflection may have spoiled the aesthetic, but it was still a vivid portrayal of his ability.

As, actually, had been the passage of play which led to the game’s first penalty, when he took possession tight to the goalline, slalomed between two defenders, and drew the foul in the box. It was a penalty earned rather than conceded, he left his feet like a skittish butterfly, but it was the slick skill which will endure.

There are many unrefined parts to his game, but that ability to dribble past defenders isn’t among them. Even now, at eighteen and with the physique of someone younger, his changes of direction make him incredibly difficult to defend one-on-one. He’s a thrilling prospect.

Kubo, of course, is on loan from Real Madrid. Because of circumstances beyond his control, he’s also been in the public eye for some time. Having initially moved to Spain to join Barcelona’s La Masia at the age of 10, he would be among a dozen youth players declared ineligible following the club’s breach of Article 19 of FIFA's transfer regulations.

He was released in 2015 and returned to Japan, joining FC Tokyo in the J League. In an interview he gave to Marca shortly after signing for Real in 2019, he discussed the difficulties of that initial hiccup.

In time, he may reflect that to have been a blessing in disguise. La Masia’s reputation remains, but its function and role does not. The academy is, as of last summer, under the direction of Patrick Kluivert and, in addition to the departure of several coaches over the past few years – most notably Joan Vila, the former director of methodology – there’s a pervasive sense of dysfunction.

In October, following a breakdown in his relationship with Kluivert, the club dismissed Victor Valdes, the former goalkeeper who had been coaching the U19a side since July. Whatever the traumas suffered by Kubo in 2015 and however difficult that situation proved to be, it’s hard to avoid the conclusion that he was better off away from Barcelona’s ideological muddle.

EXPLAINED Why was Victor Valdes sacked as a Barcelona youth coach after only 80 days?

The proof is really on the pitch. Kubo shimmers with finesse and plays with the seductive flashes which make it difficult to believe that he won’t rise to a very high level. Still, talented development has been proven an imprecise science before and there are many variables which will determined what kind of career Kubo will ultimately have.

One of them, you suspect, will be how he copes with celebrity. From the moment the world became aware of Kubo, it has – unhelpfully – known him as the Japanese Lionel Messi. Ten-a-penny identity though that may be, it’s a powerful one for an Asian player and, understandably, the resulting attention has been enormous.

Kubo has been followed to Mallorca by a phalanx of Japanese journalists. Football is not a dominant sport in the country, it battles with baseball and sumo for supremacy, but then it has never had a true star of the game.

Hidetoshi Nakata was a very fine player, but never quite reached the absolute pinnacle of the sport. Keisuke Honda, while extremely famous and still to be found playing for Vitesse, was never more than a second-tier presence in Europe. And, excellent player though remains, Yasuhito Endo’s legend doesn’t extend beyond his native country.

So there has always been a compromise. Either Japanese players haven’t quite been good enough for the very top of the game, they haven’t gained proper acceptance in Europe’s mass market or, unfairly in several cases but not always, they’ve been stalked by accusations regarding their commercial value.

But Kubo theoretically represents something different. He remains years away from his prime and a long way from even being a credible option for Real Madrid, but he has the kind of ability which makes that kind of rise plausible. And then what? A Japanese footballer excelling for the world’s most visible club – that’s a hefty prospect and one for which, as yet, there isn’t really a manual.

It does come with caveats, though, and some cause for concern. At the peak of his career, the tennis player Kei Nishikori revealed in an interview with The Telegraph that he was unable to spend more than three weeks a year in Tokyo.

“If I lived in Japan it might get crazy, but luckily I am in the States. It is difficult [in Tokyo]. I have to wear sunglasses, a hat, a mask, everything.”

The adulation was too much, the fame was too intrusive.

And that was a tennis player. And one, ultimately, who never won a Grand Slam. Imagine if Japan had a Federer, a Nadal, or a Djokovic, or what Nishikori might have experienced had his sport been played on football’s stage. What would that look like?

QUIZ Can you name the 68 managers who’ve taken charge of 100 Premier League games?