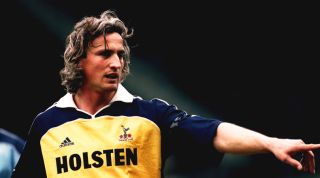 David Ginola has revealed that had things have been different during his playing career, he could have worked alongside Jose Mourinho when he was working at Barcelona.

The French winger joined Newcastle United in 1995, following a spell at Paris Saint-Germain, but claims that he was close to joining Barcelona. With both Real Madrid and Barcelona after his services, Ginola claimed that he had a conversation with then-Barça boss Bobby Robson, but rejected the Catalan giants for Tyneside.

ALSO READ: What exactly is the point of Jose Mourinho at Tottenham?

When asked if he’d have liked to play under Jose Mourinho at the London Football Awards on Thursday night, Ginola told FourFourTwo, “I could have done! Bobby Robson approached me to play for Barcelona and back then, Jose Mourinho was his translator.

Mourinho recently saw his Tottenham Hotspur side dumped from the FA Cup at the hands of Norwich. Spurs legend Ginola acknowledges the task that Jose has at the club that he made over a century of appearances for, but says he’s not been impressed so far.

“It’s not good enough,” the Frenchman said of Tottenham’s season so far.

“It is difficult this season because they have had a coach like Mauricio Pochettino for five years, and he was sacked. Five years of building is a long time.”

“But now, I want Mourinho to prove me wrong.”

ANALYSIS What does Jordan Pickford have to do to get back onside for Everton and England?

QUIZ Quiz! Can you name every FA Cup quarter-finalist of the 2010s?