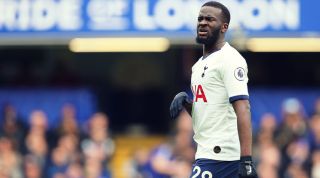 It shows the midfielder shortly after coming on against Wolves as a substitute, ambling lackadaisically after Pedro Neto. In isolation, the footage is actually mesmerising. It’s so unusual to see a Premier League player look so untroubled during a game. Particularly when his side is losing. Particularly when that player is his club’s record signing.

It’s probably not the moment to be making grand conclusions about Tottenham. Theirs is a squad neglected over a long period of time, with week-to-week difficulties informed by the trauma of transitioning between Mauricio Pochettino and Jose Mourinho.

Even so, Ndombele seems to exist in his own, independent context. In fact, it’s difficult to remember another player entering the league and becoming a point of such contention quite so quickly. But five months in, he remains a conflicting spectacle. Ndombele is everything and nothing to Tottenham. He’s both their biggest hope and also their greatest source of irritation.

He is fabulously talented, that’s for certain. Not just technically excellent, but extravagantly gifted in nearly every conceivable way. Watch him shift his feet and shimmy between opponents. Or see him knife a disguised pass through a forest of feet and into the stride of an attacking player.

As a package, Ndombele is so unusual - like a millennial update of Moussa Dembele, re-engineered to include all these ultra-modern flourishes and rewired to play relentlessly forward. He's a decadently customised version who can potentially solve two midfield problems, but with just one body.

The Wolves cameo was the nadir of a season during which the eyes on him have narrowed and the suspicion has grown. Players with no experience of English football generally arrive with asterisks against their name, but what began as a curiosity over his strange running style – an unusually tilted stance and broken gait – has deteriorated into an acrid conversation about his core fitness and commitment.

And it's getting worse. Impatience with Ndombele became frustration, then annoyance, and has recently evolved into anger among some fans. The local mood isn't charitable in general, but the reaction to Ndombele is quite separate in its simmering incredulity.

It’s troubling. If he was less talented (and cheaper), Tottenham might already have given up. Given his potential future value that would be hopelessly premature, but something still needs to change. His performances and his perceived attitude are deeply antagonistic, especially at a time when, as a minimum, Mourinho’s players need to be masking their flaws with hard work.

It's difficult to say what the solution is, not least because Ndombele's reputation and his past are in conflict. For as long as he's been a known commodity he's been revered. And yet concerns about his application have never quite gone away; there have always been frustrated mutterings.

During his time at Lyon, club president Jean-Michel Aulas was very keen to promote Ndombele as the next Michael Essien. Not without cause, given just how excellent some of his performance were. For now, however, even though parallels remain, the only real similarity is that Aulas made a great deal of money out of both players.

But there lies the dichotomy. On the one hand, there exist these plausible straight lines between him and one of the finest midfielders of his generation. On the other, those comparisons are loudly caveated, and in ways which seem to preclude him from every inhabiting that kind of territory.

Essien without that infectious, ebullient enthusiasm for the game? That's almost a contradiction in terms.

In the summer of 2019, when this transfer was completed, The Guardian's Dave Hytner wrote what now reads like a very prescient article about Ndombele, which contained all sorts of red flags.

"The raw talent has always been there but the focus has not and it is remarkable to think that as recently as the 2015-16 season Ndombele was fighting for recognition in the Amiens reserve team in the Championnat National 3, which is French football’s fifth tier.

“Talk to anybody in France about Ndombele and one word recurs: nonchalance. It is not meant as a compliment and takes in the impression that he has not always been the most hard-working player. Perhaps it is because his talent is so big that everything comes easily to him.

'“He was nonchalant,” Sullivan Martinet, his youth team captain at Guingamp, told Ouest France. “He was so strong that we were expecting more from him, more consistency. He didn’t try maybe as much. He didn’t give the impression of always being 100%. With hindsight, what harmed him was his behaviour off the pitch. We were less talented but we wanted it more than him.”

Those are alarming details. They’re the kind of anecdotes which will make fans wonder just how much due diligence was done prior to this deal. But as a pattern, on the basis of precedents which have been set in other sports, they also offer a diagnosis for what might be wrong.

It’s possible, for instance, to see the move to Tottenham – with the notoriety and the wages it afforded – as a final destination for Ndombele. In his mind, maybe it was a point of ultimate validation and the moment at which the hard work could stop.

That’s theory, not fact. A guess and nothing more. But it wouldn’t be unusual. There are plenty of athletes who have ridden their abilities to a certain point, only to then squander them in one way or another. George Best. Alex Higgins. Ravel Morrison. Those are characters from different cautionary tales, but their stories have familiar themes.

It's a very tenuously connected group, but the common denominators are unusual ability and unusual behaviour. How they actually instruct each other is neither here nor there. That they’re often found together and manifest in similar ways is what really matters.

Ndombele has no place in this conversation at the moment, but it’s tempting to see his issues through that type of lens. There are other factors involved, too. He’s playing football in a new country, living within a different culture and having to adapt to a contrasting professional environment. Those are all important details.

But perhaps none more so than this surrounding cliche: the idea that being overburdened with talent can be something to overcome - that it can inform wavering professional standards and prevent a player from seeing solutions to very obvious problems.

If only Vick had prepared properly for games. If only Daly had had the temperament for 72-hole golf. If only Ndombele could see what marrying his talent with proper industry would allow him to become.

It's all so obvious, but there must be a reason why, in practice, it often isn't.

Whether any part of this actually applies to Ndombele is debatable and, ultimately, impossible to know. But it’s an important part of a discussion which threatens to become very reductive. And unpleasant. But perhaps what’s described as laziness is really a strange quirk of personality. Maybe it's just an eccentric reaction to a situation that most of us can never properly understand.

That’s very charitable, admittedly, but human lives are very complicated. Footballers battle all sorts of hidden issues. Some of them are self-inflicted, some of them not, but all of them are capable of presenting in ways which are liable to be misinterpreted. And always by those of us who spend our time with noses pressed up against the game’s glass, never quite knowing what it's like inside.

So these layers matter, even if this incredibly strange situation doesn’t need further complication.

Does Tanguy Ndombele need to be properly reconditioned? Yes, obviously so. But maybe he is more than a physical challenge for Spurs. How far and hard he runs is one aspect of this problem, another is the way he views himself and what he perceives his position to be in relation to the sport around him.

That’s a clarity that has eluded plenty of athletes in the past. It’s also a conundrum that many coaches have spent a lot of time trying to solve. Most likely, if Mourinho, Spurs, and Tanguy Ndombele are ever to exist in proper harmony, then they’ll have to buck those trends.

QUIZ Can you name the top FA Cup goalscorers since 1980?