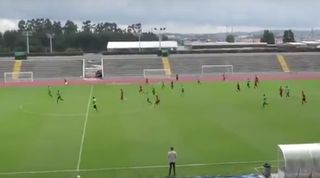 The Chinese Super League is currently taking a two-month break while the World Cup is on.

With the 2018 season recommencing in a few weeks' time, Shanghai SIPG got back into the swing of things by playing a friendly against Rio Ave in Portugal on Tuesday.

Shanghai lost 2-1, with Vito and Schutte scoring for the hosts, but Hulk's goal was the game's standout moment.

From behind the halfway line, the 31-year-old looked up and unleashed a venomous left-footed drive into the back of the net.

Shanghai, who are currently joint-top of the CSL after 11 games, return to competitive league action against Shandong Luneng on July 17.