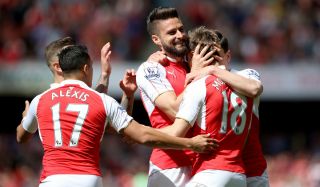 From an Arsenal point of view, it wasn’t a vintage performance. Despite taking the lead as early as the fifth minute, it wasn't until the 78th that Olivier Giroud got his second of the game. It had become a little bit nervy, but once that second goal went in there was no doubt about the result. The Frenchman bagged a hat-trick before departing skipper Mikel Arteta played a part in getting the fourth.

The Gunners had done what they needed to do. The rest of what would make the day special was out of their hands, and relying on an already-relegated Newcastle to get something from their game against Spurs seemed hugely optimistic at best.

Mauricio Pochettino’s side needed just a point to secure second place and a first finish above Arsenal for 20 years. Instead, they collapsed in spectacular fashion, losing 5-1 to a Newcastle side down to 10 men.

The irony of Arsenal – in what many consider their worst season for years – finishing above of Spurs, lauded after what was supposedly a brilliant season, was delicious.

There wasn’t a lot wrong from an Arsenal perspective. Of course, a second-place finish is not the be all and end all, but the circumstances mean it’s something to celebrated. The inability to put a dreadful Villa side to the sword much more quickly might be seen as a negative, but given the way the day went it seems churlish to dwell on that.

"It's a day I will never forget. I can't even talk. I feel very honoured to play for this club and captain this place. This club is class and once you are here you never forget it." – An emotional Mikel Arteta reflects on his final appearance for the club.

Arsenal fans haven’t had a great deal to cheer about this season. The team has underperformed and been the cause of much frustration, but the final day of the Premier League season was something to enjoy.

Sure, it’s not a trophy, it’s not silverware, but if you can’t take pleasure in your local rivals imploding in comical style, thus bringing about your highest league finish since 2005, you might as well give up.

Not a loser, per se, but it was a shame that Tomas Rosicky was unable to take part in the final day from a playing point of view. The veteran Czech international has been a hugely popular figure in his 10 years at the club, but injuries have hugely affected his career.

Arsene Wenger felt unable to pick him for a game that was competitive with second place still to play for, so in that sense it was sad for him not to get on.

On the other hand, the post-game lap of appreciation saw his team-mates give him a guard of honour, wearing 'Rosicky 7' shirts, and he’ll be remembered fondly by Arsenal fans.