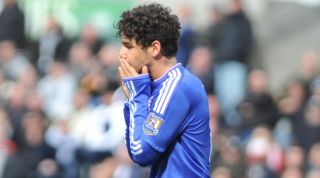 Conte has entered the building.

From the darkness there comes light – well, something like that. Despite defeat against Swansea ending Guus Hiddink’s unbeaten record in the league since his return to Chelsea, the Blues at least got a hint of why they shouldn’t be making Alexandre Pato’s move to Stamford Bridge permanent this summer.

The Brazilian lacked any real presence up front in the absence of Diego Costa, putting in a rather flimsy hour's shift before he was subbed off for youngster Bertrand Traore.

Traore himself is benefiting from Chelsea’s sub-par loan strikers, too. He’s already been given chances over Radamel Falcao, with his half-hour against Swansea proving more productive than anything Pato achieved on the afternoon.

It’s one game in isolation, but Pato is supposed to be playing for a contract at Chelsea and he looked a player who was either out of his depth, or lacked the stomach to test Ashley Williams at the back. Whatever it was (maybe both?) it wasn’t pretty. So that’s that decided, then.

There were some major traffic issues on the M4 to Swansea on Saturday. Given their performance, Chelsea would have probably been better served by doing a Manchester United and arriving late to the game. In fact, there’s an argument to suggest they didn’t turn up at all.

The Premier League champions – yes, we can still call them that – were as disjointed as they have been in a long while, lacking any real threat. In the week the club’s new manager was confirmed, we thought things may have been somewhat different. After all, we’re being told almost daily how these players are now playing for places under Antonio Conte for next season.

We have to wonder if Conte realises what he’s getting himself in for as, on this evidence, the new Chelsea boss has his work cut out.

Hiddink has done a good job at calming things in west London, but the big issues remain with a squad lacking in many departments. The manner in which Chelsea lost to Swansea confirmed it.

“I will continue to focus on my job with the Italian national team and will reserve speaking about Chelsea again until after the Euros.”

Conte tried to convince us on Monday he wouldn’t be dealing with any Chelsea duties until he starts work at Stamford Bridge this summer. A day later he was at Cobham meeting his new players…

Now that Conte has been confirmed as Chelsea’s next manager, the predictions for how his new regime will start at Stamford Bridge are already rolling in…

Diego Costa. Ever heard the one about a player who gets better simply by not playing? Well Costa benefited from that phenomenon this week thanks to Pato’s abject display against Swansea. It showed just what Chelsea will be missing if they allow the Brazil-born hitman to leave this summer, which would be folly of the highest order.

Without their star striker, Chelsea lack any real threat against opponents (Aston Villa aside) and his return from suspension to face Manchester City this weekend is perfectly timed.

Matt Miazga. We’ve already stuck the boot in enough where Pato is concerned, so we’ll let him off the hook here. It does mean poor Miazga is under the spotlight for a shoddy first half against Swansea, though.

The young American struggled on Saturday and suffered the ignominy of being hooked at half-time. Hiddink said after it was because he was on a yellow card and too much of a risk for being sent off, but surely playing John Obi Mikel as a makeshift centre-back was more of a risk to Chelsea?

That Hiddink preferred a midfielder to Miazga says it all about the 20-year-old's performance. The hope is that it doesn’t knock his confidence too much. Miazga is an up-and-coming defender with bags of potential, so it would be a great shame if he doesn’t realise that in a Chelsea shirt. Saturday was a game to forget, though.