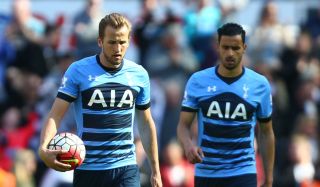 Never speak of that again.

Not an awful lot but, in time, Harry Kane winning the Premier League Golden Boot will be appreciated for the brilliant achievement that it truly is. Perhaps, however, there's more to celebrate than just its literal significance.

Kane was rather laughed off by the football community last year and dismissed as a single-season anomaly, but rather than replicating what he produced in 2015/16, he has surpassed it by improving immeasurably. He's a natural goalscorer and we've known that for a while, but over the last eight months he's added layers to his game which have diversified his contribution.

While perhaps not recognisable in his goal tally, his growing capability as a pivot, his developing impact in the channels and his more disciplined pressing have all helped to make Tottenham a more complete proposition in the attacking third. Whether traceable or not, that has almost certainly helped to make him the division's top scorer.

The loss at Newcastle wasn't an honest performance and, mercifully, it's been a while since a Tottenham fan had cause to say that. Everything which has been written about this season is true and all the praise these players have received remains valid, but there's no way to contextualise a 5-1 loss to a relegated team.

Given the opportunity, Mauricio Pochettino might want to re-do last week and, in retrospect, his vague devaluation of the Arsenal rivalry was a mistake. Outsiders can often place too much importance on those kind of benign remarks but, whatever the cause, the collective attitude on Sunday was close to shameful. Spurs were a muddled, apathetic mess and the season's many high points don't excuse that.

The problem with big-picture thinking is that it ignores just how emotionally attached fans are to their teams. Losing 5-1 hurts – it always does – and the implications of that particular defeat and the circumstances under which it occurred will be used to antagonise every Tottenham fan for the entire summer.

Qualifying for the Champions League again is a wonderful achievement and the progress made over the past 18 months has been heartening, but neither offers much solace from the embarrassment.

“It makes sense to me, but sometimes you have to toe the line with the supporters. You can say that in the dressing room to the lads and say ‘listen, this is our agenda’, but sometimes you need to keep the fans on board and say ‘we’ll finish higher than Arsenal’. They’ve been rivals for many, many years, so it’s a delicate issue. Listen, I like his desire, I like his focus and his single-mindedness. He’s had a great season.”

Clearly, there's no reason to turn this into something it isn't, but Murphy was right and those comments were misjudged. Tottenham supporters have been on the receiving end of this rivalry for a long time and so, until that changes, it will always have an exaggerated importance which needs to be respected.

Pochettino apologises to Tottenham fans after 'worst day as a manager'

Pochettino, for signing his new contract.

True, the Argentine oversaw a terrible capitulation to finish the season, but he unquestionably remains a force for enormous good. His new deal reflects that and his commitment to Tottenham will, at the very least, protect the club from vulturuous rivals who also appreciate his work.

Tottenham are as much a winner as he is, but maybe – and this is perhaps something which isn't said often enough – he is fortunate to have an employer to whom he is so obviously suited. Daniel Levy has given him a platform from which he is expected to achieve, but in a healthy, long-term way which maximises Pochettino's abilities and guards him from unrealistic demands. Unlike several of his predecessors, he actually has very healthy working conditions.

At another club with a different culture, many of his skills would be rendered redundant by aggressive transfer-policies or nullified by players with impenetratable egos. Tottenham are soft clay, a club in the middle of a growth stage, and he is subsequently in an environment which which he can have a profound effect.

Yes, Spurs are lucky to have him, but this a mutually beneficial relationship.

Everyone. There were some dismal performances at St James' Park – farewell to Ryan Mason, who will presumably never play for the club again – but the greater issue concerned the collective abdication of responsibility.

Spurs were a team of hollow men in the north-east and a mirage of a side who didn't appear to understand the game's significance. Disappointment and defeat are part of a fan's life, but complete humiliation never should be and, though all will be forgiven in time, those players have some bridges to build next season.

Following this team has often been enormous fun, but they signed off with a figurative middle finger and that must never be allowed to happen again.