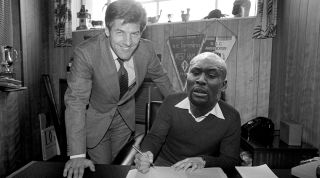 The ex-Chelsea striker was tipped for great things early in his career when he impressed for England’s Under-21 side, but he has struggled to live up to expectations. Cole’s career has been hindered by inconsistent performances, being mixed up with other players called Cole, a recurring knee injury and, most worryingly, a repeated tendency to sign for West Ham United.

A 2006 move to the Hammers from Aston Villa was widely seen as a positive change, but Cole has since signed for West Ham 10 further times in deals that have been heavily criticised since Cole was already playing for West Ham.

A weary Cole expressed his delight at signing a three-month contract with West Ham during his customary unveiling this afternoon before asking to be excused from holding a shirt up in front of his face due to the onset of a repetitive strain injury.

While the transfer window remains closed for deals between clubs, there is currently no legislation preventing a club signing its own player.

West Ham have released an effusive statement in praise of Cole, who they feel "will be, is currently and already has been a great asset to his side".

However, club officials refused to comment on speculation that they are lining up a summer bid for West Ham striker Carlton Cole, who many feel would be an ideal replacement should Cole fail to deliver.