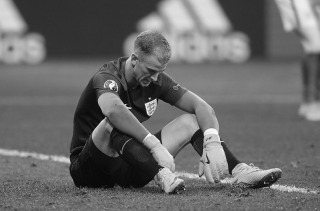 That escalated quickly. When new Manchester City coach Pep Guardiola dared to drop England No.1™ Joe Hart to the bench in his first Premier League match in charge, it took barely two days for rumours of Hart’s apparently impending exit to form, grow and swirl around Eastlands. And when Willy Caballero, who turns 35 next month, was also picked to start City’s Champions League play-off against Steaua Bucharest, even more tongues started wagging.

Reports of a doomed relationship between manager and goalkeeper are premature, despite the credible suggestion that Guardiola distrusts Hart's distribution, but it seems suddenly plausible that Manchester City may lose their hitherto first-choice keeper. It’s fair to say 2016 hasn’t really been Hart’s year.

So what next for the Shrewsbury-born stopper? Here are five options he might consider.

A number of clubs would perhaps have stayed their hand this summer had Hart’s potential availability surfaced sooner. Everton are one.

Finding a reliable, top-quality goalkeeper was top of Ronald Koeman’s to-do list at Goodison Park when he arrived this summer, with the increasingly erratic Tim Howard having been ushered across the pond and Joel Robles looking occasionally impressive but ultimately inconsistent. Koeman opted to give a three-year contract to countryman and journeyman Maarten Stekelenburg, having brought the 33-year-old to Southampton on loan last season, and with whom he coincidentally shares an agent.

Stekelenburg enjoyed a fine Toffees debut against Spurs, but after several years on the sidelines for club and country he doesn’t resemble a No.1 to match the ambition of Everton’s new owners. Hart would undoubtedly be an upgrade.

As for Hart himself, he doesn’t lack self-belief and would back himself to start regularly at Goodison. A move there, perhaps initially on loan, could benefit all parties provided he could accept a lack of (immediate) European football.

…and in the red corner, a team with five senior goalkeepers on the books already. Yet they still could be interested.

Not unlike their Merseyside rivals, Liverpool have taken a quantity-over-quality approach to filling a hole in nets. Simon Mignolet could be the dictionary definition of ‘unconvincing’ and his would-be replacement Loris Karius has a broken hand, prompting the emergency signing of Alex Manninger, who made his debut when Karius was two years old. The promising Danny Ward is on loan in the Championship; so is Adam Bogdan, but for very different reasons.

All in all, then, loaning Hart while Ward improves and Karius recovers would arguably make sense. Hart could even return to City midway through the season if necessary without being cup-tied in Europe.

They, too, look vulnerable in goal. While 22-year-old Sergio Rico did go to Euro 2016 with Spain, his place in Sevilla’s line-up isn’t totally secure. Hart would be a leftfield addition, but potentially a good one.

It seems less likely that Hart would be willing to move overseas. English players need encouragement to dip their toe in foreign waters as it is, and there have been precious few success stories at the top level in recent years. However, options in England that come with a promise of European football are in short supply.

If Hart could persuade himself to try this Abroad place that everyone keeps mentioning, then Gladbach could be a tempting proposition.

The German club can offer Champions League football (barring a monumental balls-up in the home leg of their play-off round tie against Young Boys after winning 3-1 in Switzerland) and the inevitable pay cut wouldn’t necessarily be so severe after they received some £30m from Arsenal for Granit Xhaka.

Gladbach’s No.1, Yann Sommer, hasn’t been reticent about upping sticks himself. He’s previously talked up a potential move to England, and seemed disheartened by – or jealous of – Xhaka’s departure.

Hart may also want to watch the Champions League play-off between Monaco and Villarreal: the latter have seen Spain international Sergio Asenjo struggle with a serious injury, and both of their replacements look sub-par. Monaco boast two decent keepers in Croatia international Danijel Subasic and Italian veteran Morgan De Sanctis, but at least Hart could live in Monte Carlo.

Well, why not? If Hart wants to show his mettle, ambition and class, now’s the time. Apart from anything else, England boss Sam Allardyce (nope, it still sounds weird) would appreciate a sign that his leading goalkeeper is willing to fight for a place after his bad summer.

Guardiola hasn’t exactly shown Hart the door. After his side’s win over Sunderland, the Manchester City manager recognised that Hart was “not happy” to be dropped but also that no player should be.

More importantly, he explained: “I needed to use the goalkeeper to play quicker – Willy had this quality first of all [because] he trained more times. He arrived on the first day. That doesn’t mean Joe can’t do that. I know his quality: he is an amazing goalkeeper.”

The long read: Guardiola's 16-point blueprint for dominance - his methods, management and tactics

With many other managers, that might sound hollow. Pshaw, we cry, he’s making up a reason – you pick your best goalkeeper at all times, tactics be damned. But Guardiola, the obstinate trainer and, yes, obsessive tactician, isn’t other managers.

It is entirely feasible that he’d pick a goalkeeper based on his having had more opportunities to train in the desired system. This is Guardiola, for goodness’ sake: he’s already turning Aleksandar Kolarov into a centre-half, and liking the results.

It’s almost impossible to second-guess the Catalan, so conclusions such as that made by the Sunday Mirror’s Andy Dunn, who said the manager “was very non-committal and the impression you get is that Hart has no future there”, should be taken with a pinch of salt. (Dunn then delved into Hart’s psyche, adding, “I think he knows it’s not a decision made after pre-season – Guardiola must have seen Euro 2016 and the poor tournament Hart had.”)

This isn’t necessarily the end of the road for Joe Hart at Manchester City. But if things are going that way, then he needs to show his new boss he can follow directions – or start looking for a new destination.