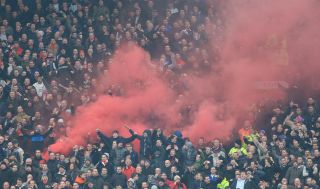 OK, confession time. It was I who came up with the Top 10 in FourFourTwo’s "World’s Greatest Derbies" feature this month. Or, more accurately, it was I, along with the rest of the FFT team, who decided on the criteria that ultimately decided who made the final cut and in what order.

But it was some of our other rules, or non-rules, that determined why Liverpool versus Manchester United came top of the English derbies – by far the biggest bone of contention among readers, even though the new issue of FourFourTwo has only been on sale a matter of days.

Firstly, the matter of locality. At no point did we say this was exclusively a rundown of ‘local’ derbies, although seven of our 10 are, indeed, same-city scraps. Besides, few have quibbled at the presence Barcelona-Real Madrid, even though the Clasico divide is 300-odd miles (Liverpool to Manchester is about 30, since you ask, while Ipswich to Norwich, to give you one other example, is 44). Argument over. We hope.

Secondly, each of our games needed to have a resonance the world over, and it became pretty obvious, pretty quickly, that the only other derbies that beeped on our foreign friends’ radars were Liverpool vs Everton, Manchester City vs Manchester United and Arsenal vs Tottenham. (Sorry, Newcastle and Sunderland.) But none pack quite the global punch of the Reds against the Red Devils, English football’s two most successful clubs and most widely-supported too.

You could argue, of course – and believe me, we did – that Gremio-Internacional lacks worldwide appeal, but thanks in part to the World Cup, we’re sure that’s about to change. And we couldn’t very well do without a grudge match from football’s spiritual home, where the Porto Alegre ding-dong, according to our Brazil brains trust, gets top billing these days.

Still not convinced? That’s kind of the point of such features, and you lot have well and truly taken the bait. Maybe next time we should do British football’s Top 10 derbies...

The new issue of FourFourTwo is out now