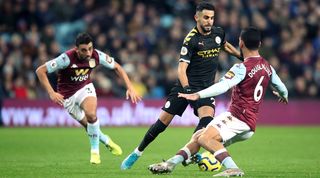 Manchester City signing Riyad Mahrez felt like “one of those” transfers. Like Fabian Delph before it, or when Pep Guardiola brought Mario Götze to Bayern - a big club pulling the rug from a smaller one to pad their squad. Because they can. Not because they need to.

Sometimes though, good moves only become apparent in the long-run. Mahrez has blistered the soles of left-backs this season, becoming more than just a featured artist on a best-selling concert tour. This is the Riyad Mahrez we all knew and loved from Leicester - from the Arjen Robben-like runs to the angle-defying finishes, perhaps best summed up with his virtuoso solo goal against Aston Villa.

The winger is now integral to Manchester City, because he provides chaos. And at times over the last couple of years, this Man City side has lacked chaos - not the bad kind - but the game-changing genius of someone to conjure the unthinkable. Like Messi did for Pep at Barca. Like Robben, himself, in Bavaria. Like De Bruyne can do, should he be used out wide.

Since arriving in Manchester in 2016, Guardiola’s taught the Premier League a lot - from ball-playing goalkeepers to the art of pressing - but he’s learned a lot of lessons. The tiki-taka evangelist of Barcelona receded in Munich when confronted with new egos and cultures. He evolved as a coach. He’s evolved further at Manchester City.

It seems churlish to even suggest it, but in many ways, Manchester City are Pep Guardiola’s most pragmatic team. The liquid gold of some of City’s play is breathtaking - literally, among the very pinnacle that our country has ever witnessed - so to label them with words you’d associate with Simeone and Allardyce seems daft. And yet, there’s a mechanical consistency at the Etihad that was never really present in the Nou Camp.

Guardiola’s ideas of inverting wing-backs and converting wide-men into midfielders in the English game have been triumphant. But the same could be said of the consistency with which City have utilised cut-backs and crossing. De Bruyne spams the ball dozens of times a match into the box, like an stubborn marketing manager looking for any kind of engagement. Sané and Sterling were instructed to remain wide and balanced, vultures on opposite branches, ready to swoop in and pray on the other’s cross.

The relentless pendulum swing of City’s crossing has swept all before it domestically for two years. But even the best need other outlets.

Guardiola was rendered mortal in the infamous Champions League encounter at Anfield in 2018. Against a Liverpool side that isolated Fernandinho and took a 3-0 lead in the tie, City reverted to the same crossing the ball aimlessly into the box for 45 minutes. The robotic, revert-to-system tactic was suddenly exposed; Jurgen Klopp, in that moment, became a grinning game-show host, unveiling the correct answer that the audience had pondered for months.

That’s why the ascension of Riyad Mahrez, from bit-part big buy to something close to his talismanic heroism in Midlands, is so exciting. This is a dimension that Aguero can’t muster all by himself. That De Bruyne sorely lacks so deep in midfield.

Sané’s conflicts with his manager are well-known - perhaps thanks to the German’s tendency not to follow on-field instruction - but Mahrez at his peak could be even better. The league is all but dusted and Pep already has a hand on one of the League Cup’s three handles. The defence of the FA Cup can be played at walking pace until the quarters, surely, but in Europe - where Man City have looked vulnerable in recent times - the need for a new edge is vital.

Riyad Mahrez is up to speed with City now. In the fire of big-game cauldrons, Man City have often found themselves lacking unpredictability. Perhaps they’ve found it, in a signing that seemed at the time like a £60m bid just to feather their own nest.

QUIZ Quiz! Can you name the 50 highest foreign goalscorers in Premier League history?

LIST Which England players could step up should Kane fail to return for Euro 2020?​