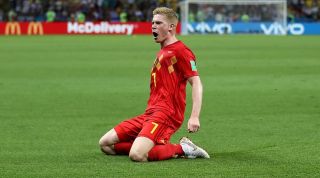 Belgium shocked Brazil in the World Cup quarter-finals with a 2-1 victory in Kazan. A Fernandinho own goal gave Roberto Martinez's men the lead in the 13th minute, before a wonderful Kevin De Bruyne strike doubled the Europeans' advantage shortly after the half-hour mark.

Brazil probably should have had a penalty when Gabriel Jesus was felled by Manchester City teammate Vincent Kompany, but Tite's side didn't do enough to turn the game around despite Renato Augusto's header with 14 minutes left on the clock. Belgium will play their first World Cup semi-final since 1986 on Tuesday, while Brazil's wait for a sixth star goes on.

2. France ease to victory over Uruguay

The injured Edinson Cavani was always likely to be a significant loss for Uruguay, and so it proved as France ran out 2-0 winners in the first quarter-final of the day. Raphael Varane headed Didier Deschamps' side in front shortly before half-time, before a major error from goalkeeper Fernando Muslera helped Antoine Griezmann score his third goal of the tournament.

In the end it was a comfortable afternoon for France, who were never unduly stretched by a Uruguayan attack which never got going. Les Bleus' win means they will take part in the World Cup semi-finals for the first time since 2006.

England manager Gareth Southgate has compared himself to a racehorse trainer on the eve of the Three Lions' quarter-final clash with Sweden. Jamie Vardy, Kyle Walker and Ashley Young are all nursing injuries or knocks following the penalty shoot-out victory over Colombia, and their boss is aware that players may attempt to mislead him about their fitness ahead of such a big game.

"The lads would always be prepared to risk injury for these games but that can’t be at the detriment of the performance,” Southgate said. “So you’ve got to have a racehorse trainer’s eye at times to sort that out. It’s not straightforward because we won’t see everything, but we’ll have a feel from what they’re reporting and the way they’re running, and then we can try to make the best decisions we can."

4. Sweden warn they're not to be underestimated

Sweden may be underdogs going into Saturday's meeting with England, but Janne Andersson's side have triumphed from such a position many times before - and captain Andreas Granqqvist has warned the Three Lions that they're not to be taken lightly.

“I read something about people in England suggesting that Sweden were a dream opponent,” the centre-back said. “Someone said something about 99 times out of 100 they would beat us? Well, it’s fun for England to have that sort of confidence. Let’s play the game and see how things go. Sweden usually play well against England. We’ve had good results against them.”

Croatia enjoyed a brilliant World Cup debut in 1998, reaching the semi-finals in France with a team featuring the talents of Davor Suker, Zvonimir Boban and Robert Prosinecki. Victory over Russia on Sunday would see the current team replicate that achievement, and defender Dejan Lovren believes Zlatko Dalic's side are ready to take their chance.

“Of course we respect that [1998] generation," the Liverpool man said. "They are the most successful team in Croatia history. They set the bar so high. But we are very strong, and with luck and hard work, we can outdo the 1998 generation."

Japan always seemed doomed in their last-16 meeting with Belgium when stories emerged that an octopus who had successfully predicted their group stage results had been killed back home. A pair of Russian dolphins have subsequently taken over the role of psychic sea animals, and the aquatic mammals are confident of victory for Stanislav Cherchesov's men against Croatia.

Mitya and Solnyshko, who live in a dolphinarium in Yaroslavl, were thrown round discs depicting the flags of the two nations and told to bring them back. The Russian flag was returned faster on three occasions compared to Croatia's sole success, which means a 3-1 win is on the cards on Saturday.