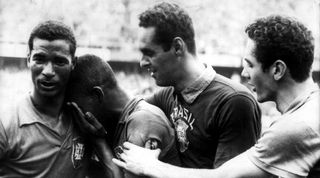 “Pele is obviously infantile. He lacks the necessary fighting spirit.” That was Brazil team psychologist Joao Carvalhaes’s stark verdict on the 17-year-old striker who, averaging a goal a game in his first full season at Santos, had forced his way onto the fringes of the Seleção's 1958 World Cup squad.

The verdict must have shaken Pele who was, in his own words, just a “skinny little black boy”, rigorously applying boiling hot towels to his injured right knee as he struggled to get fit. All his hopes now rested on coach Vicente Feola. Would he dare defy the psychologist?

Losing the 1950 World Cup on home soil to Uruguay had felt, Pele recalled, “like the end of a war, with Brazil the loser and many people dead”. The only way to erase the stain on Brazil’s honour was to win the Jules Rimet Trophy in 1958, and the only way to do that – newly elected Brazilian FA president Joao Havelange determined – was to micromanage the squad.

Havelange’s technical commission subjected players to a battery of physical and psychological tests. Almost every member had some intestinal parasites, and many suffered from long-term malnutrition, anaemia or syphilis. More than 500 teeth were extracted from players, many of whom had never visited a dentist.

Carvalhaes then profiled Feola’s squad. Convinced that fair-skinned players helped to make a team emotionally stable, he concluded that Garrincha, a tiny, mixed-race winger from the favelas, was mentally unfit to represent Brazil. Having been invited to draw the first thing that came to mind, the player sketched a sphere with spokes emerging. Assessors, assuming this was the sun, were nonplussed when Garrincha said he had drawn Botafogo team-mate Quarentinha.

As Brazil began their campaign with a 3-0 victory over Austria, Pele and Garrincha – two players who would epitomise Brazilian football’s golden age – waited on the sidelines. A 0-0 draw against a well-drilled England left the Seleção needing to beat favourites USSR.

Depending on which story you believe, the players either urged Feola to ignore Carvaelhes and select Garrincha and Pele, or Feola – confident that Pele had recovered – made the change himself. We do, at least, know that Feola told the psychologist: “You may be right. The thing is, you don’t know anything about football.”

The match began with what French football legend Gabriel Hanot described as the “greatest three minutes in the history of football”.

In the first minute, Garrincha bamboozled the Soviet defence before hitting the crossbar. In the second minute, Pele hit the crossbar too. In the third minute, Didi slid the ball past three opponents for Vava to shoot past Lev Yashin. It took 74 minutes for Vava to score again, but the outcome was never in doubt.

Brazil had found their winning formula. In Feola’s variant of 4-2-4, Pele operated just behind centre-forward Vava, while Mario Zagallo was trusted to push forward or track back into midfield as required.

Despite being the youngest player to appear in a World Cup – and setting up Vava’s second goal – Pele’s performance was affected by his increasingly sore knee. He departed the celebratory dinner early, vowing to do better in the quarter-final.

In a tight game against Wales, Pele received the ball with his back to goal, chested it onto his right foot and prodded into the corner. It was, he said, “perhaps the most unforgettable goal of my career”.

In the semi-final against France, Pele played with the audacity of a schoolboy and fighting spirit of a veteran. After Just Fontaine had equalised for France, Brazil’s No.10 grabbed the ball, ran back to the centre circle and shouted at his team-mates, “Let’s get started”. He scored a second-half hat-trick that sealed a 5-2 victory.

The 1958 Mundial was the first to be screened live on television, so Pele’s excellence was beamed around the world. After his second goal in the 90th minute of the final – another 5-2 win, against Sweden – he blacked out and team-mates had to revive him.

Brazil had won their first World Cup. Pele wept with joy – and disbelief. Seven years before, he’d stolen peanuts from a warehouse in a desperate, unsuccessful attempt to swap them for football boots.