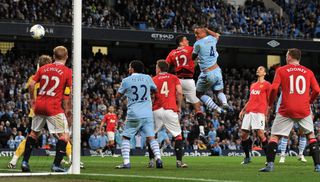 Vincent Kompany’s brilliant 25-yard strike helped Manchester City secure a 1-0 win over Leicester on Monday night to leave them on the brink of another Premier League title.

Here, Press Association Sport takes a look back at some of the memorable moments from the Belgium defender’s City career.

Don’t shoot from there!

My face screaming "NOOOO VINNY WHY U DO THIS" so hard 😂😂😂 what a hit boi !!! Captain Incredible 💙 @VincentKompanypic.twitter.com/Ba6WKyPdg3— Raheem Sterling (@sterling7) May 6, 2019

Centre-back Kompany was not renowned for his pot shots from distance, but chose the perfect occasion to slam in his first goal from outside the penalty area in over a decade with City to finally breakdown Leicester’s resistance at the Etihad Stadium.

Sergio Aguero had seen his effort come back off the crossbar and was then denied by a fine reaction save from Kasper Schmeichel as City looked to be heading towards a frustrating goalless draw against the Foxes, which would have handed the initiative back to rivals Liverpool in the tense title race.

With 20 minutes left, Kompany picked up the ball some 30 yards out, thought about hitting one, before striding forward and as the Leicester defenders backed off, not expecting what was about to happen, the Belgian drilled the ball into the top-right corner – as the home fans and City bench erupted in joyous disbelief.

A head of his time

City hosted rivals United on April 30, 2012 knowing a win would send them above their neighbours to the top of the Premier League table – and within touching distance of a first title for 44 years.

Kompany rose to the occasion with a crucial header in first-half injury time when he climbed above Chris Smalling to power home David Silva’s corner past Edwin Van Der Sar.

It proved to be the game’s only goal as City claimed pole position in the title race ahead of their final two matches against Newcastle and QPR, both of which they won to successfully hunt down a first English championship since 1968.

Man of the people

Champions!!!!!! What a great feeling!! So happy to be able to share another trophy with our amazing fans!#ManCity#SharkTeam#Championspic.twitter.com/8CqCtyX7vi— Vincent Kompany (@VincentKompany) April 15, 2018

City moved to the brink of another success last season with victory at Tottenham, which was confirmed the following day when United suffered a surprise home loss to West Brom.

That prompted jubilation in the blue half of Manchester – and a group of players including captain Kompany, Bernardo Silva, Kyle Walker, Fabian Delph and John Stones partied in public at a bar in Hale, near Altincham.

Leading boisterous scenes, the City skipper jumped up onto a table to deliver a rousing address, using some choice colourful language to describe the club’s long journey to the top – “especially if you have been a blue for more than 40 years in your heart,” Kompany said. “But tonight, we won it again! So let’s celebrate together…” And they did.

City boss Roberto Mancini turned to Kompany to stand in for injured captain Carlos Tevez and lead by example for the 2011 FA Cup semi-final against United.

Shackling the likes of Wayne Rooney and Dimitar Berbatov, Kompany helped City go on to deliver a 1-0 win as they reached a first FA Cup final since 1981.

Mancini’s side went on to lift the trophy, beating Stoke 1-0 in the final with a goal from Yaya Toure.

Hands on the trophy at long last

After the euphoria of beating United to go top in 2012, City went on to win at Newcastle, leaving the destiny of the championship in their own hands as they finished off by hosting QPR, who were battling potential relegation.

A quite incredible season ended in the most dramatic way possible, with City snatching a 3-2 victory from the jaws of defeat to pip United to the title on goal difference.

Pablo Zabaleta had put City in front before the visitors fought back to lead through Djibril Cisse and Jamie Mackie, despite seeing Joey Barton sent off.

However, City were not to be denied as substitute Edin Dzeko nodded the hosts level during stoppage time before – just when all seemed lost – Aguero collected Mario Balotelli’s return pass and drove home the goal which sealed the title as commentator Martin Tyler bellowed: “I swear you will never see anything like this again!”