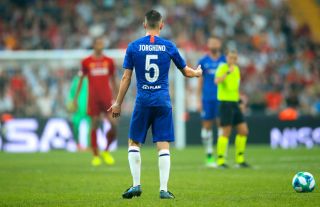 Jorginho and his Chelsea team-mates were on the receiving end of a 4-0 thrashing by Manchester United on Sunday – but was it so bad that the Italian decided to change his name?

The 27-year-old was on the field for three of United’s goals in Chelsea’s miserable Premier League opener at Old Trafford.

He was withdrawn with a quarter of the match remaining, not long before Daniel James put a fourth past the Blues.

Jorginho was back in Frank Lampard’s starting line-up for Wednesday night’s Super Cup clash with Liverpool in Istanbul, although there was something different about the former Napoli midfielder.

On closer inspection the word stamped on his back was Jorghino, rather than Jorginho. The misprinted replica kit could well become a collector’s item for Chelsea fans in the future.

The Brazil-born schemer followed Maurizio Sarri from Napoli to Stamford Bridge in July 2018, featuring in the Europa League final victory over Arsenal that earned Chelsea a place in this year’s Super Cup. Sarri has since left for Juventus, with former Blues midfielder Lampard replacing him as head coach.