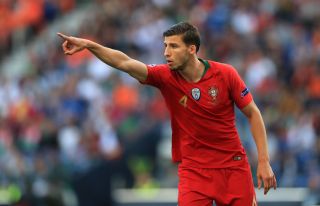 Here, the PA news agency takes a look at the 23-year-old and how he will fit into the City side.

Dias is a product of Benfica’s academy at Seixal and will be following a route taken in recent years by Bernardo Silva and Ederson by moving to City. He has been hugely influential for the Lisbon club since breaking into their first team and played a key role in the Portuguese title success of 2018-19. He captained the team and scored in his final appearance against Moreirense on Saturday. He has 19 caps for Portugal and helped them win the Nations League last year.

Dias appears to fit the mould wanted by City manager Pep Guardiola. He is regarded as a complete and modern centre-back, who is both strong in defence and comfortable on the ball. This would make him ideal for City, whose desire to play out from the back is a central plank of their identity under Guardiola. At 6ft 1in, he has height on his side and his leadership qualities add to his appeal.

Why City need him

Signing Dias will end City’s long search for central defensive reinforcements. The matter has been pressing since former captain Vincent Kompany left the club at the end of the 2018-19 title-winning season. Due to injuries and inconsistent form, John Stones has not developed into the player City hoped and Nicolas Otamendi, who moves the other way in a deal linked to that for Dias, has not been fully trusted for some time. A bad injury to Aymeric Laporte last season highlighted City’s shortcomings in the position, with midfielder Fernandinho operating as a makeshift defender for most of the campaign. There were high hopes for 19-year-old Eric Garcia but he has expressed a desire to leave. Nathan Ake was brought in for £40million earlier in the summer but it was felt another option was still needed.

Why City turned to Dias

Virgil Van Dijk and Harry Maguire were both considered prime targets in recent years but City refused to match the asking prices of Southampton and Leicester respectively, and consequently saw those players move to Liverpool and Manchester United. Kalidou Koulibaly emerged as the new first choice over the summer but, again, Napoli’s valuation – said to be over £70million – proved prohibitive. Further options emerged, with Sevilla’s Jules Kounde reportedly considered before focus switched to Dias.