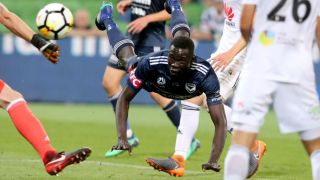 Victory had been thrashed away to Ulsan in the AFC Champions League in midweek and their week looked set to continue in dismal fashion as they deservedly fell behind to a comical own goal on Sunday.

Leigh Broxham appeared to handle from a left-wing corner and then stabbed the ball past his own goalkeeper in an attempt to clear the ball.

Although Kevin Muscat's Victory had fought back to win from behind in the reverse fixture, while Wellington had previously won just once away from home in a poor season, a repeat looked unlikely prior to Athiu's introduction with 18 minutes remaining.

Phoenix's Alex Rufer was then sent off in stoppage time for kicking out at Terry Antonis.

Premiers' Plate winners Sydney were dominant from the off in their 3-0 victory and Matt Simon nodded them in front in first-half stoppage time.

A second header from Bobo followed after the restart and the Sydney front man soon had his 26th league goal of the season - an outright record tally for one campaign including finals goals.

Adelaide's loss means they can no longer catch Victory, who are assured of at least fourth place.