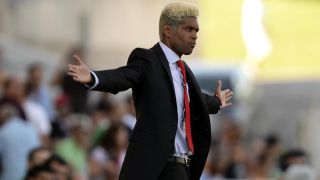 The 20-time Portuguese international's career spanned a total of 28 years, starting at Portuguese minnows Estrela da Amadora in 1990 before moving to Benfica in 1993, and then finishing in the MLS with the Los Angeles Galaxy in 2008.

Xavier was unveiled to reporters on Monday and gave a positive review of his new team, who are 109th in the last FIFA rankings, and have never failed to ever for the World Cup.

While he represented Portugal, Xavier was born in the African nation, which was formerly a Portuguese colony.

"I have followed the Mozambican team for years," he said.

"I am very proud to come back to my country."

Xavier served an 18-month suspension for doping in 2005 when he was playing for Middlesbrough, and since ending his playing days in 2008 he has endured a topsy-turvy coaching career.

His first job came at Portuguese top-division side Olhanense, where he lasted just three months, before spending a five-month stint at Farense in Portugal's second division.

Last July he was handed a one-year contract with Aves - also in Portugal's second division - where he was coach until September.

Alberto Simango Junior, president of the Mozambican Football Federation (FMF) said he hoped Xavier could bring "good results" to his nation of birth and said the appointment showed the ambition of the national governing body.

However, the president refused to discuss the length or any other details of the contract.