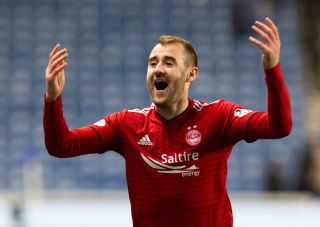 Niall McGinn insists Aberdeen have smashed the Ibrox fear factor after pulling off another win over Rangers in Glasgow.

The Dons had gone a quarter of a century without tasting victory in Govan before finally getting the better of Pedro Caixinha’s Light Blues in May 2017.

But they have now backed up that result by triumphing on both their visits to the home of their bitter rivals this term, following up December’s Ladbrokes Premiership win by dumping Steven Gerrard’s current crop out of the William Hill Scottish Cup with Tuesday’s 2-0 quarter-final replay triumph.

Now McGinn – who sent the Reds on their way to a semi-final showdown with Celtic when he pounced on a Glen Kamara mistake just three minutes in – says his side no longer have reason to dread the long trip south from Pittodrie.

The Northern Ireland winger said: “Even in the last few years, that fear factor hasn’t been there. We’ve finished above Rangers in the league and on the road this season, we’re unbeaten in eight games.

“In my time here we’ve won a couple of times but coming off the back of the first tie at home, it was an uphill task for us.

“However, we showed great maturity and composure to put on a performance like we did.

“We knew we’d have to take our chances – I’ve read the pass and took it well. But more importantly we’re through to the next round.

“To see out the game with a second goal was a bit of a cushion. They threw everything at us but we were solid, from Stevie May up front through to Joe Lewis in goal.”

Aberdeen also knocked Rangers out of the Betfred Cup but suffered heartache against Celtic in the final.

It was the third time in three years that Derek McInnes’ team had fallen at the last hurdle against the the Parkhead outfit.

Now having shaken their Ibrox monkey off their backs, McGinn says it is time they got rid of the one representing their Hampden hoodoo against the Hoops.

He said: “Being at a big club like Aberdeen, you enjoy getting to semi-finals and finals.

“We want to go a step further – we’ve got another opportunity to get to a final and there’s no bigger task than beating Celtic.

“But before that we need to get back to winning ways in our league form and look forward to Saturday’s game with Livingston.”