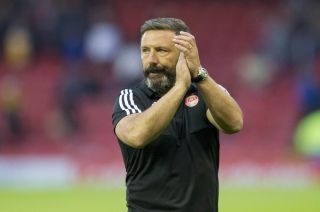 Aberdeen ended their goal drought in emphatic fashion with a first-half goal blitz at Hamilton to secure their first Ladbrokes Premiership win of 2020.

Main had got the nod ahead of top goalscorer Sam Cosgrove and it was a decision which paid off for Dons boss McInnes.

Aberdeen fans have turned on McInnes in recent weeks but the 423 members of the travelling support, who should be applauded for braving the winter weather, were chanting his name after McLennan’s goal.

Hamilton, however, remain rooted in a relegation dogfight and face a massive clash with bottom of the table Hearts at Tynecastle on Saturday. If they are to start moving up the table then they must tighten up at the back, having shipped 18 goals in their last six outings.

Hamilton were first to threaten when David Templeton darted in behind the Aberdeen defence latched onto to a flick from Marios Ogkmpoe but he was unable to steer his lob over Joe Lewis on target.

Aberdeen’s long wait for a goal was finally ended in the 15th minute when Main opened the scoring. Andrew Considine played a long ball over a flat-footed Accies defence and Main should great composure when in on goal to deftly chip the ball over Luke Southwood.

The visitors doubled their advantage eight minutes later. Main gathered a throw-in and flicked it to Lewis Ferguson, who then laid the ball off for McGinn and the winger was allowed too much space inside the penalty area as he passed the ball beyond Southwood.

Things got worse for the home side as captain Easton was forced off with what looked like a dislocated shoulder after landing awkwardly following a challenge by Main,  to be replaced by Shaun Want.

Easton’s lengthy treatment meant there was six minutes of added time and during that period Aberdeen claimed a third as McLennan steered a header from a Considine cross into the bottom corner.

Accies made two changes at the interval, with David Moyo and Will Collar coming on for Templeton and Sam Woods.

Aberdeen pushed for a fourth goal and Main had the ball in the net but was flagged for offside.

The hosts pulled a goal back with six minutes remaining through Ogkmpoe, who slotted home a pass from Moyo – but it was too little, too late.