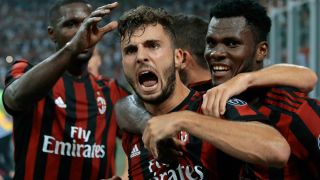 Patrick Cutrone scored his first AC Milan goal as his side cruised into the Europa League play-off round with a 3-0 aggregate victory over CSU Craiova.

Leading 1-0 from the first leg in Romania, Vincenzo Montella's men won 2-0 in Thursday's return match at a packed San Siro to seal a comfortable triumph in the third qualifying round.

Giacomo Bonaventura, who missed the second half of last season after undergoing thigh surgery, sent Milan on their way with a ninth-minute strike, the first continental goal of his career.

Cutrone had only played five minutes of senior football prior to starting both legs of this tie to start the campaign, but the highly rated 19-year-old was able to wrap up victory with a close-range finish early in the second half.

Hakan Calhanoglu later came off the substitutes' bench to make his debut as Milan, playing in Europe for first time in four seasons, sealed their place in Friday's play-off draw in Nyon.

Franck Kessie had the ball in the net early on, only to be denied because an offside flag had already been raised against Cutrone.

But it did not take Milan long to open the scoring, Bonaventura latching on to a loose ball to find the net from 12 yards after a corner from the right had not been dealt with by Craiova goalkeeper Nicolae Calancea.

The hosts were on top, although they required Gianluigi Donnarumma to make a pivotal save at the other end - somehow doing so with his face - from Alexandru Mitrita after a slick passing move resulted in Hristo Zlatinski playing the winger in on goal.

Ricardo Rodriguez, scorer of Milan's goal in the first leg, then forced a good diving save from Calancea.

Two of Milan's three line-up changes from last week's clash came close to scoring just before the break, Suso's powerful strike being saved by Calancea and Andrea Conti firing wide from a presentable chance on the rebound.

Having struck early in the match, Milan sealed victory in the initial stages of the second as a 51st-minute left-wing free-kick from Rodriguez deflected into the path of Cutrone, who applied the finish from two yards out.

Donnarumma pushed over Gustavo Vagenin's ambitious free-kick for Craiova, before he kept out another effort from the same player soon after, ending any hopes the side who finished fifth in Romania's top flight last season may have had of launching a comeback.

Milan almost made it three on the night when M'Baye Niang's thumping header from Calhanoglu's accurate cross was well saved by Calancea, as Montella's men comfortably saw out the win.