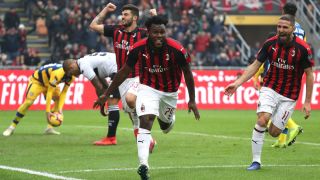 AC Milan fought back from a goal down to beat Parma 2-1 and move to within a point of Roberto D'Aversa's side in the Serie A table.

A Patrick Cutrone strike and a Franck Kessie penalty, awarded after a VAR review, saw the Rossoneri overturn Roberto Inglese's first-half opener and end a run of two league matches without a victory.

Parma players were far from pleased with the intervention from the video system, as their three-game unbeaten run came to an end at San Siro.

Milan's first-half dominance yielded little more than two close efforts from the lively Suso, who was the biggest threat in attack in the absence of the suspended Gonzalo Higuain.

Riccardo Gagliolo somehow headed wide for the visitors from six yards, although a foul had been awarded against Antonino Barilla, but Milan's set-piece frailties proved their undoing early in the second half.

Matteo Scozzarella whipped in a corner and Inglese escaped Kessie to glance a fine header past Gianluigi Donnarumma.

Gattuso introduced Fabio Borini in the hope of inspiring a response, but it was Cutrone who levelled before the hour, steering a volley off the inside of the right-hand post and into the net, the goal standing after a VAR check.

The video assistant came to Milan's aid again 67 minutes in, when Alessandro Bastoni was eventually penalised for meeting a cross with outstretched arms, allowing Kessie to rifle home from the spot.

Alberto Grassi steered wide after beating the offside trap with seven minutes to play, which proved to be the final opportunity for Parma to avoid a 14th defeat in 16 away games against Milan.