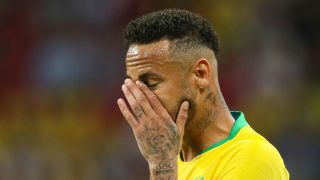 Having fought for the lead role for Brazil at Russia 2018, Neymar ultimately failed to inspire much of an ovation as the five-time World Cup winners were upstaged by Belgium's so-called 'golden generation' and dumped out in Friday's quarter-final.

If Belgium's performance was as gripping and well-structured as an Oscar-winning classic, Neymar and Brazil were the antithesis, full of emotion, often desperate and lacking in substance, the Selecao's display possessing parallels with a Golden Raspberry-grabbing picture rather than one worthy of an Academy Award.

While Osorio of course meant the word in the context of Neymar's frequent theatrical over-reactions on the pitch, sadly for Brazil the world's most expensive player did little to hush his critics.

For most of the last year, it's almost been as if Neymar has been living out his own biopic.

Ever since his Hollywood-esque world-record move to Paris Saint-Germain, Neymar's career has been a continuous drama, going from one major story to another.

There have been spats with team-mates, show-stopping performances, heckles from his own supporters, constant transfer links to the club – Real Madrid – that embodies drama like no other and a nasty injury that at one point appeared a threat to his World Cup campaign.

Then there was the return from that broken metatarsal just before the World Cup – the script was written, he need only to play the role Brazil expected of him.

The entire match in Kazan was utterly breathless, an occasion befitting the tie and this remarkable World Cup. Brazil started in electric fashion and caused Belgium's three-man defence serious issues.

But their forays forward became predictable. After settling in, Belgium's Red Devils were red hot when they wanted to be.

They knew very well Brazil's defence and midfield – without the combative Casemiro – would provide them with space if Roberto Martinez's men were smart enough.

And they were. Belgium's willingness to sit back saw Brazil fall into a trap, Marcelo's ventures up the pitch exploited numerous times.

While the Belgium opener came via a Fernandinho own goal at a corner, it was a set-piece won at the end of a break.

The lack of fire in Neymar's first-half display was summed up just before the half-hour mark. When losing the ball outside the Belgium area, he leisurely sauntered back as another counter beckoned – luckily Marcelo snuffed it out.

But just before the break, the mountain in Brazil's way doubled in size, as Lukaku powered past Fernandinho on the counter, fed Kevin De Bruyne and he drilled home a goal made and finished in Manchester.

For all of the flak Roberto Martinez receives, his setup in the first period worked like a charm.

The second half was more about hanging on as Neymar tried to do it all himself – including a pretty scandalous attempt to win a penalty from Marouane Fellaini.

Brazil's talisman was at least getting on the ball, picking it up wherever he wanted, turning this way and that, injecting a little imagination to a frontline that had been sorely lacking it before half-time.

The goal that at least made Belgium nervous came from an unlikely member of the supporting cast – Renato Augusto heading in Philippe Coutinho's cross before going close again soon after.

Still Neymar tried to be the inspiration and for that he deserves credit, forcing a remarkable late save from Thibaut Courtois.

But in the end, the plot favoured Belgium, Neymar and Brazil joining the likes of Lionel Messi, Argentina and defending champions Germany in falling in Kazan, as the city literally named 'cauldron' provided a searing spectacle in its final game of Russia 2018.