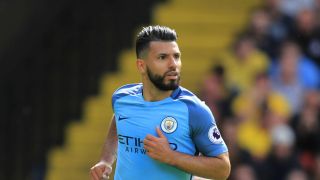 Pep Guardiola insisted Sergio Aguero will be a Manchester City player next term after the striker concluded a prolific season with a brace in the 5-0 Premier League win over Watford.

Aguero moved on to 33 goals for the campaign in all competitions at Vicarage Road – his most prolific since joining City in 2011 – as Guardiola's men secured third place and automatic progress to the Champions League group stages in style.

Guardiola lavished praise on Aguero's all-action showing in Tuesday night's 3-1 victory at home to West Brom, although his appraisals of the Argentina striker have often veered closer to constructive criticism in his first season at the helm.

The arrival of Gabriel Jesus in January briefly saw Aguero demoted to the bench but the forward duo combined effectively from the start for the second time in a week at Watford, with the Brazil striker completing the rout.

Questions over Aguero's future have been a staple of Guardiola's media briefings this term and there was a weariness about the Catalan as he confirmed there is no intention to move on the 28-year-old or resurgent captain Vincent Kompany during any close-season overhaul.

"We finished 15 points behind Chelsea so we have to play better and Sergio helped us a lot.

"We have to provide him with better solutions to score goals. It doesn't all depend on Sergio - he did his job really well."

When asked to further clarify his stance on Aguero, Guardiola added: "You've been there in Manchester, how many times have I said?

"He will be here. Are you happy now?"

Kompany opened the scoring at Vicarage Road having re-established himself as City's defensive fulcrum on the back of his latest injury nightmare.

The 2-1 defeat at Chelsea when he returned to the starting line-up in April proved to be City's last in the Premier League and the Belgium international has also chipped in with three goals during an eight-match unbeaten run.

"We were so happy with Vincent playing eight games in a row, playing 90 minutes and we saw something special with him," Guardiola said.

"I could imagine when City won their Premier Leagues that Vincent Kompany was one of the reasons why.

"In the last two seasons with Manuel [Pellegrini], when Vincent was not there because he was injured, they missed him a lot. He's an exceptional player."

Guardiola refused to be drawn on the futures of out of contract quintet Yaya Toure, Bacary Sagna, Gael Clichy, Jesus Navas and Willy Caballero but insisted he is delighted with the efforts of his squad amid reports of considerable upheaval at the Etihad Stadium over the coming months.

"This is one of the best groups I have ever trained, they never gave up," the former Barcelona and Bayern Munich boss added on Sky Sports. "It was a pleasure to be with them."